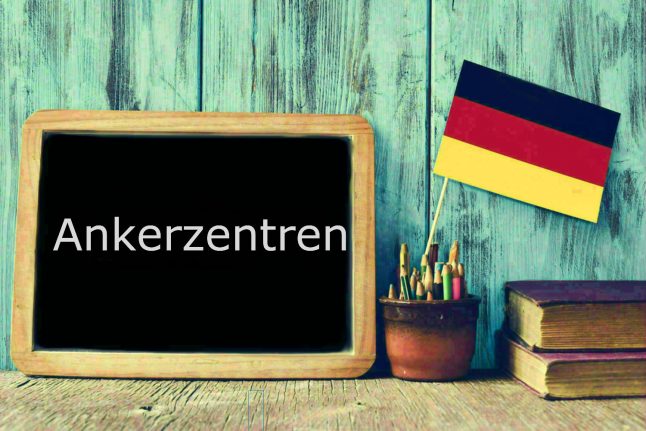 Ankerzentren may literally translate to anchor centres, which in Germany are admission centres for refugees. However, the word anker is an acronym which is made up of several words: “An(kunft)” (arrival), “k(ommunale Verteilung)” (municipal distribution), “E(ntscheidung)” (decision) and “R(ückführung)” (return).

It was first used in a coalition agreement between CDU/CSU and SPD in February in Bavaria as a way to speed up asylum procedures. Refugees are to be accommodated in an anchor centre either until they are distributed to local authorities who handle their asylum cases, or deported back to their country of origin, the agreement stated.

The first anchor centres appeared in Bavaria this August, after months of contentious debate led largely by CSU Interior Minister Horst Seehofer about how the centres should operate.

This explains why the heated term – oft discussed in the German media – snagged third place in a German word of the year competition, as decided by a panel of judges from the Society for the German Language (Gesellschaft für deutsche Sprache or GfdS) on Friday.

Seehofer argued that the centres – which also have a representative from the Federal Employment Agency based in them – would quickly assess which refugees have “Bleibeperspektiven”, or the high possibility of living and working in Germany.

Other German states have been critical of the Ankerzentren, calling them effectively detention centres. They point out that, under the current model, there are no language courses or schooling at the centres as refugees wait in limbo to learn about their status.

According to ZEIT online, the Bavarian city of Manching already put the model of Ankerzentren into practice over two years ago, and now some refugees have remained, waiting on a decision, for up to 18 months.

Without a doubt, the term will remain widely used in 2019, as German politicians – especially in the border state of Bavaria – continue to discuss the most effective, and humane, way to deal with new arrivals to Germany.