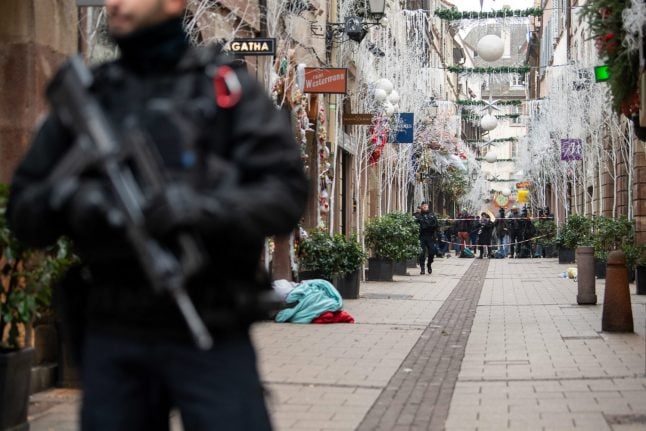 Police in Strasbourg on Wednesday after the attack. Photo: DPA

French authorities said Wednesday that two people had died and 13 people were injured during a shooting at a Christmas market in Strasbourg. Initially it was thought the death toll was three.

Witnesses described the gunman's words before the incident, which occurred around 8 p.m. on Tuesday evening. French prosecutor Remy Heitz also described the shooting as a terror attack.

“Terrorism has once again stuck our country,” said Heitz.

Strasbourg mayor Roland Ries said most of the victims were men, including one Thai tourist.

Over 600 people, including police, troops and helicopters were on the heels of the attacker who had “sowed terror” in the city.

The 29-year-old suspect, who is said to be from Strasbourg, was sentenced to two years and three months for burglaries in the city of Mainz and in the Baden-Württemberg state, and jailed in 2016.

“He served a year in Germany before being expelled to France,” a spokesman from Baden-Württemberg's interior ministry told AFP.

According to the Tagesspiegel newspaper, the man broke into a dentist practice in Mainz, Rhineland Palatinate state, in 2012, making away with cash, stamps and gold used for teeth fillings.

However he was not deemed potentially dangerous Islamist, German authorities said Wednesday.

“For us, he was a blank slate,” said a spokeswoman of the Federal Criminal Police Office, which takes charge of cases related to terrorism.

An interior ministry spokeswoman also said that there has been no indications suggesting an Islamist link to the suspect.

German authorities were on the lookout for the fugitive “along the Rhine” river region, the ministry spokesman said.

“But at the moment we do not believe that he has crossed into the country,” he added.

The gunman opened fire Tuesday evening at the famed Strasbourg Christmas market, which draws thousands of visitors every year. French authorities said the attacker had been on their list of extremists and “is actively being hunted by security forces”.

SEE ALSO: What we know so far about Strasbourg Christmas market shooting

Meanwhile, German police said they had detained three people in a taxi with French licence plates, after tipoffs given by the public following the Strasbourg attack.

The vehicle was halted on the A1 motorway close to the city Bremen, a police spokesman in Delmenhorst told national news agency DPA.

One of the passengers was masked, according to the report.

There was so far no indications that they were linked to the Christmas market attack, but police were checking the taxi for any suspicious traces and interrogating the three people.

Meanwhile, in Berlin, where a fatal terror attack took place at a Christmas market in Breitsheidplatz nearly two years ago, officials said no extra security measures were being put in place in Christmas markets, according to Berlin interior senator Andreas Geisel, reported the Berliner Morgenpost.
As The Local reported, security measures have already been put in place at markets, including at Breitscheidplatz.
Geisel said the Strasbourg attack, however, showed that the terrorist threat remained high.
“This also applies to Berlin,” he said. “The police are prepared accordingly and protect the Christmas markets in our city visibly and with concealed means.” said Geisel.