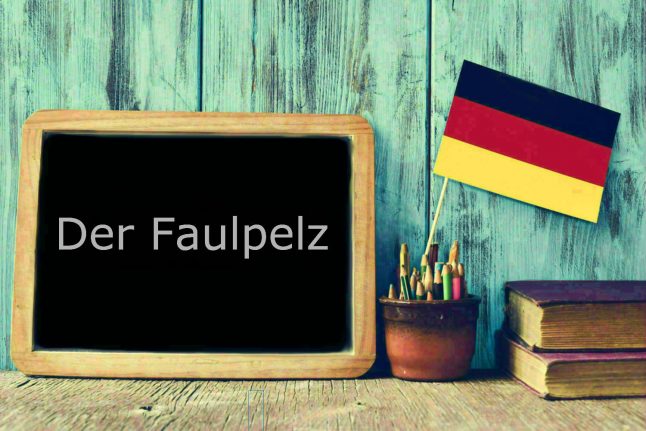 The term Faulpelz has been in use since Early Modern High German, and although it was initially used to refer to the mould that forms on rotten foods, since the 17th century it has also been used to describe someone as lazy.

Faulpelz is a compound noun, and the first word it consists of  s the word faul. The pronunciation of this German words strongly suggests that it is related to the English word 'foul' which means rotten, perhaps a relation to the word's earlier use to describe mouldy food.

Indeed, faul can be used to describe food as rotten, but its most common use in German is as the word meaning 'lazy'.

Faul actually has multiple meanings in German, for example here it is used idiomatically to describe something as 'fishy':

That all sounds great, but I think there is something fishy going on.

However, when it comes to Faulpelz, the translation of faul as 'lazy' is the most helpful.

And what about Pelz? Well, a Pelz is the same as a 'pelt' in English, an animal's fur which can be used to make clothing or rugs, in German Pelz is more often used to describe a dense and fluffy fur, rather than Fell which translates more like the English 'coat'. So a mink might have a Pelz rather than a dog with a Fell.

So Faulpelz means 'lazy-fur'? Not quite… It could either refer to simply someone being a lazy 'fur' and not doing anything, or perhaps its roots are similar to that of the German term Bärenhäuter, now described by Duden as obsolete in this meaning, but it was once used to describe soldiers who preferred to lie on their bear skins rather than go into battle.

It seems that now Faulpelz is mainly used as a fairly colloquial way to describe someone as lazy, just like the English 'lazy-bones'. It could also be translated as 'slacker', so it's certainly not something you want to be called by any of your German friends or colleagues.