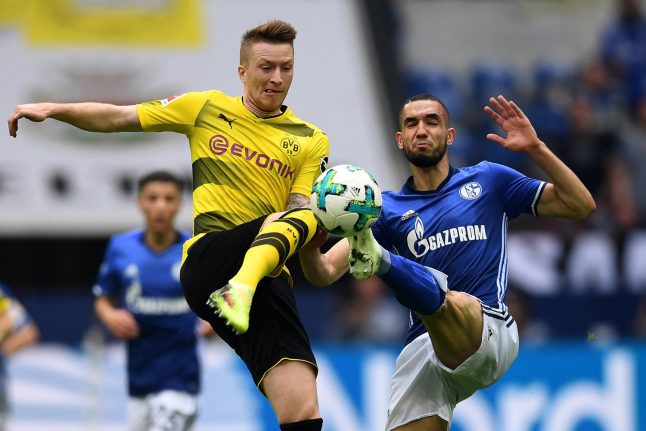 But for two match days per year this fanaticism reaches fever pitch as Germany’s oldest and most storied footballing rivals come head to head.

Forget Bayern Munich versus Dortmund or everyone else versus RB Leipzig. Germany’s biggest football rivalry is the Revierderby: Borussia Dortmund versus Schalke.

Today sees Schalke host Dortmund in the 93rd Revierderby of the Bundesliga era. While these days the matches are accompanied by friendly banter rather than the fights and hooliganism of years past, there’s still no love lost between two of German football’s biggest clubs.

Perhaps one insight into why the rivalry is so fierce is simply how close it’s been historically. In 92 Bundesliga clashes there has been 32 wins for Dortmund, 31 for Schalke and 29 draws.

While no fan would ever admit it, the club’s similarities also underpin why the rivalry runs so deep. Both come from Germany’s industrial Ruhrgebiet and boast working class fanbases – many of whom come from families who have spent generations supporting their team.

Part of the reason for the fierceness of the rivalry comes from the clubs’ respective histories as two powerhouses of German football. While they may have since been overtaken by their Lederhosen-clad rivals from the south in the Bundesliga era, they still rank among the most successful in German history.

After the behemoth that is Bayern and the faded glory of FC Nürnberg, Dortmund and Schalke rank third and fourth on the all time list.

Dortmund have the most recent bragging rights, with all of Schalke’s titles coming before the formation of the Bundesliga in 1962. Dortmund have won five Bundesliga titles to Schalke’s zero, with the latest coming at the peak of the Jürgen Klopp reign in 2011-12.

Like two brothers trying to get one up on each other, there's also their history in European football. In May 1997, Schalke lifted the Europa League – besting Dortmund's European Cup Winners Cup victory from 1996 which was the first European trophy won by a German team.

Just one week later, Dortmund put Schalke in their place by winning the Champions League – the biggest prize in club football.

While Schalke’s second-placed finish last year may have indicated a shifting of the sands, the appointment of new Dortmund coach Lucien Favre in the summer – along with a handful of new signings – have reinvigorated the yellow and black.

This season Dortmund are unbeaten after 13 match days and sit seven points clear on top of the table. Schalke on the other hand started the season poorly, sitting in 12th place.

While it’s a long way to go until the champions are crowned, Schalke would like nothing more than to throw a blue and white spanner in the works of Dortmund’s title challenge.