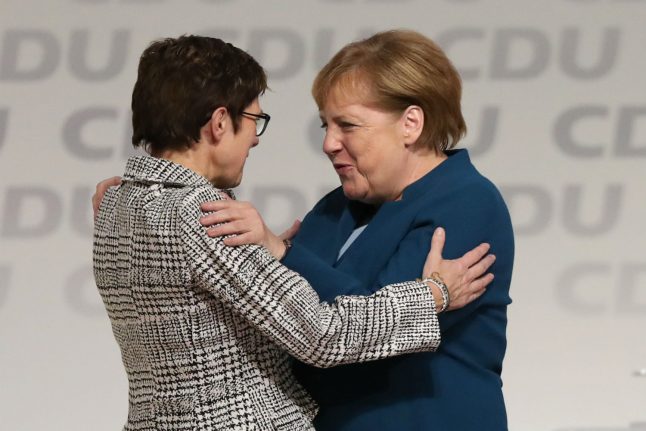 Kramp-Karrenbauer received 517 of the 999 valid votes cast, while Merz trailed only narrowly behind 482. A majority of 500 votes was required. Health Minister Jens Spahn stepped down after the first ballot.

Kramp-Karrenbauer (also known as AKK in the German media) projected the image of a centrist in the mould of Merkel, a traditionalist who was trying to hold the Volkspartei (people's party) together.

“What she tried to present was the image of the unifier, of a leader, a future party chairwoman who can keep this very big tent together,” Joerg Forbrig, senior transatlantic expert at the German Marshall Fund, told The Local.
“She's also very conciliatory in my opinion. She emphasized that she intends to run this party as a team.”
Forbrig said that her two competitors seemed “much more intent on sharpening the conservative profile of the party, possibly also shifting it further to the right away from the middle.”
'Courage to stay the course'
AKK, 56, pledged to maintain continuity after 18 years of Merkel at the helm while opening up the Christian Democratic Union (CDU) to more grassroots democracy.
In a brief, upbeat address before the vote that brought many delegates to their feet, she called on the party to reject the politics of fear as the far-right makes inroads in Germany and Europe.
“We must have the courage to stay the course against the Zeitgeist,” she said.
AKK beat corporate lawyer Friedrich Merz, 63, who had quit politics in 2009 after losing a power struggle against Merkel and has long nursed a grudge against the more centrist chancellor.
The third candidate – vocal Merkel critic and current health minister Jens Spahn – lost in the first round.
Merkel, 64, had earlier mounted a staunch defence of her moderate course since becoming chancellor in 2005.
Accepting a lengthy standing ovation from delegates, many tearful and holding “Thanks, boss” placards aloft, a visibly moved Merkel said the party had won four national elections under her by holding fast to its principles.
“In difficult times we shouldn't forget our Christian and democratic stance,” she said.
Diminished party

Merkel has moved the CDU steadily toward the political centre during her long tenure. More generous family leave, an exit from nuclear power and an end to military conscription are among her signature policies.
While Merkel remains popular, AKK inherits a diminished party which is currently polling at roughly 30 percent, far below the about 40 percent enjoyed during Merkel's heyday.
The CDU has bled support to the right in the form of the AfD, as well as to
the resurgent Greens.
Meanwhile Germany's oldest party, the Social Democrats (SPD) — junior
partners in Merkel's “grand coalition” – are mired in an even deeper crisis.
The party has long languished in Merkel's shadow and could well decide to jump ship before 2021 to seek to avert further vote debacles – a move that would almost certainly trigger new elections.
Underlining the importance of the CDU's choice for the SPD's own future, party leader Andrea Nahles offered AKK close cooperation.
“You have big shoes to fill — good luck,” she tweeted.