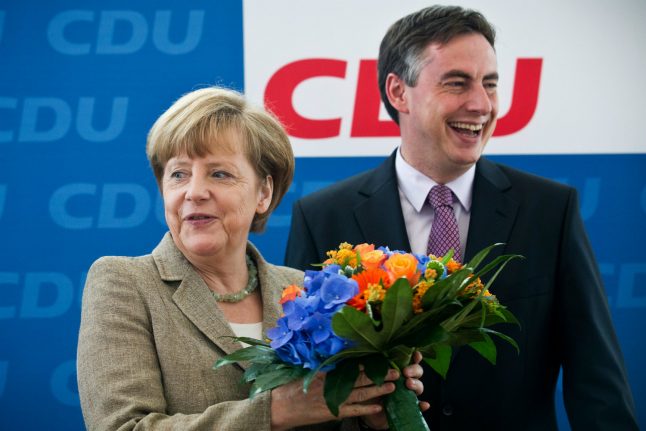 Chancellor Angela Merkel congratulates David McAllister in 2014 when he became the CDU's top candidate for the European elections. Photo: DPA

The Germans have a word for that time of day when you clock off work: Feierabend, which literally translates to 'party/celebration evening' in English.

This concept of downing your tools, switching off your computer or putting your work phone to one side, is ingrained in culture and embraced by much of the population.

And even the chancellor abides by it.

“Angela Merkel is very intelligent, she understands the most complex political issues in a record time and she – rightly so – can sometimes be quite demanding,” Christian Democratic Union (CDU) Member of European Parliament (MEP) David McAllister told The Local.

“She expects people to work hard. But as we say in German, once we have Feierabend, once the work is done, she is a very friendly woman with a really good sense of humour.”

McAllister, who was born in West Berlin to a Scottish father and German mother, has known Merkel for nearly 20 years.

He has been an MEP since 2014, is vice president of the European People’s Party and was formerly state premier of Lower Saxony, which marked the first time a dual German-British citizen held a prominent public office position in Germany.

Following his election in 2010, he was lauded as a rising star in the CDU and as a potential successor to Merkel. However he told The Local he was not a candidate for the CDU top job, and was focusing on his role in Europe.

McAllister is often referred to as “Mac” in the German media –  a nod to his Scottish name –  and previous election campaigns have been based on the slogan: “I’m a Mac.”

Does Merkel call him “Mac” too? “No,” said McAllister, laughing. “She calls me David.”

He added that the pair worked very closely together during his time as state premier.

“I have supported Angela Merkel for many years,” said McAllister. “She did a lot for Lower Saxony.” David McAllister and Angela Merkel greet each other at the European People's Party (EPP) Congress held in Madrid in 2015. Photo: DPA

Another side of Merkel

It appears that the chancellor rarely has a day off, often shuttling around Germany for different speeches or meetings daily, and attending events around the world.

McAllister, a lawyer by profession who splits his time between Brussels, Strasbourg and Bad Bederkesa in Lower Saxony, where his family lives, agrees that Merkel is a “hard worker – 12, 14, 16 hours a day”, he said.

But Merkel also knows how to wind down.

“When the work has been done then she likes to relax, cool down, maybe by having a beer or a glass of wine, and she’s very much in favour of personal contact,” said McAllister. “I’ve often seen her communicate with our heads of government or state from all different countries.”

It’s this down-to-earth approach that makes Merkel, who has been at the helm of the CDU for 18 years, and chancellor since 2005, seem more human.

Despite her serious demeanour at times, Merkel can be just like the rest of us.

This was shown when she enjoyed  a get-together with European leaders, including French President Emmanuel Macron and Luxembourg Prime Minister Xavier Bettel, over beer in Brussels recently after Brexit talks.

And it’s why the footage of her explaining to an elderly French women that she is not Macron’s wife and is actually the Chancellor of Germany, is so compelling.

SEE ALSO: 'Madame Macron?' 'No, I'm the chancellor of Germany' Sipping on a beer. Photo: DPA

Born in Hamburg on July 17th, 1954, Angela Kasner was just a baby when her father, a Lutheran pastor, was given a parish in a small town in Brandenburg, then East Germany.

After growing up in the former German Democratic Republic (GDR), she went on to study at Karl Marx University in Leipzig (now Leipzig University). It was there she met and married fellow student Ulrich Merkel although they divorced a few years later.  Merkel went on to marry chemistry professor Joachim Sauer in 1998.

Although Merkel fiercely guards her private life, we were given a window into her youth when she revealed to a group of young people that she had smuggled money from the West while on holiday in the Eastern Bloc – something that would have been quite rebellious at the time.

Merkel gained a doctorate in quantum chemistry in 1986. Two months before Germany's reunification in 1990, Merkel joined the CDU and the following year took the job of Minister for Women and Youth under Chancellor Helmut Kohl.

When Kohl was caught in a political slush fund scandal, she called for his resignation in 1999, and in 2000 was chosen to lead the CDU.

Whatever you think of Merkel, her staying power at the top proves she’s a shrewd politician. From fighting against nuclear power to taking a hardline against Greece in the global financial crisis, and allowing refugees to enter Germany at the height of the world refugee crisis in 2015, there have been many controversial moments in her career.

Her humanitarian stance regarding the refugee crisis was praised across the world, including by the United Nations. Time magazine even listed her as its person of the year.

But the move was equally condemned and has contributed to the meteoric rise of far-right attitudes in Germany and the success of parties like Alternative for Germany (AfD), which is now in all state parliaments and the Bundestag.

Yet she stands by her decision.

McAllister said 2015 was a “huge challenge for Germany”.

“All of a sudden Europe was confronted with a wave of migrants,” he said. “And what the German government did at that time to avoid a humanitarian tragedy in the Balkans was that we temporarily opened our border to shelter hundreds of thousands of people who were already on their way to Germany.”

McAllister believes this can't be repeated and since then the government “has worked hard to bring numbers down”.

However, he added that Merkel has always maintained that the migration challenge “can only be tackled at a European level”.

“That’s why we in the German CDU, and German government are in favour of an external European border protection,” he said, adding that they wanted “closer cooperation” between countries on these issues.

“We are also of the opinion that within the EU, all countries should shoulder their responsibility and show solidarity when it comes to giving refugees/asylum seekers shelter,” he said.

The public rarely catches a glimpse of Merkel behind the scenes. So what is she really like and how does she come to decisions?

“She is straight to the point, she’s down to earth and what I like very much is that she’s a no fuss politician,” said McAllister.

However if you’re planning on using small talk around her, don’t bother.

“She doesn’t like unnecessary 'blah-blah' and she’s very results oriented,” he added.

“She always starts by saying: 'We have this challenge, these are the circumstances, how can we solve this problem? We have A, B and C, the advantages of plan A is this'…”

In the German language, you have to address strangers, people in higher positions to you and older people with the ‘Sie’ form as a sign of respect. You can only use the ‘du’ form when the person in the higher position offers it to you.

So what’s the best way to address Merkel?

“But I’m very honoured that she offered to me that I call her Angela,” McAllister added.

“Germans have their rules on who is allowed to offer whom to say ‘du’ and in this case it’s absolutely clear that she would have to offer me.” David McAllister and Angela Merkel at a meeting in Strasbourg in 2015. Photo: DPA

Merkel has said that she has no plans for a future political career when she steps down as chancellor, however, she wants to stay in office until her term ends in 2021.

McAllister said: “I welcome very much that she will remain our chancellor for as long as possible.”

CDU delegates will vote for the next party leader on Friday at a party conference in Hamburg.

“We have three excellent candidates and the 1,101 delegates can decide,” said McAllister, who wouldn’t reveal who he planned to vote for.

It is certainly a new dawn in the party that McAllister joined when he was just a teenager, spurred on by the party’s commitment to Europe and Helmut Kohl’s politics.

The MEP said Merkel’s achievements –  getting re-elected four times in a row – were remarkable.

“I know many people who vote for our political party because of her personality,” he added, pointing to Merkel’s pull.

Thinking about the bigger picture on how Merkel will be remembered, McAllister believes she’s had a huge impact and will be looked back on fondly, despite the decisions that have divided people.

“She is definitely one of the big German chancellors in our still quite young history as a republic of Germany, since 1949.”