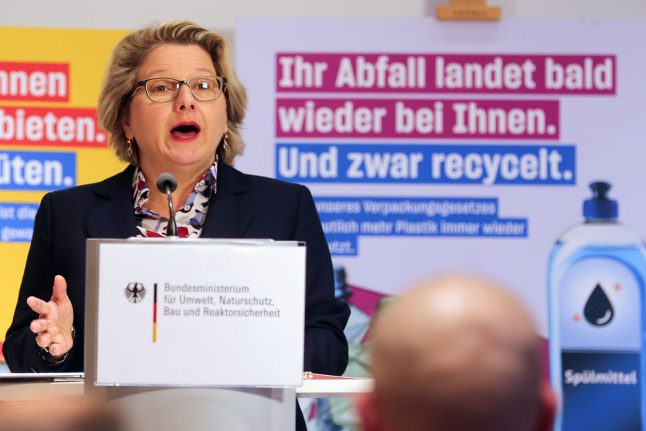 “We simply produce too much plastic in our consumer and disposable society,” said Schulze when presenting her plan “No to the Throwaway Society. “Even if we don't want to do so at all, we export these consumption patterns to emerging and developing countries.”

In Germany, around 220.5 kg of packaging waste per capita was generated in 2016 – significantly more than the EU average.

A cornerstone of Schulze’s proposed five-point plan is to make drinking fountains – a common site in countries such as the U.S. but rare in Germany – ubiquitous in cities in order to discourage consumers from purchasing plastic water bottles.

“There should be easily reachable water refill stations in public places,” said Schulze.

As part of the general plan, Schulze is pushing for products to become better repairable and recyclable, spare parts to be in stock, and the mandatory use of recycled plastic.

She also seeks to strengthen the requirements for compost and for the disposal of packaged food so that fewer plastic particles end up in biowaste, biogas and sewage treatment plants.

Lastly, Schulze wants to support the countries from which a lot of garbage ends up in the oceans in setting up collection and recycling systems. Starting in 2019, a total of 50 million euros will be earmarked for this over ten years.

Changes at the consumer level

Schulze’s plan is related to the new Packaging Act, which has already been adopted and will enter into law on January 1st. It regulates that “reusable” and “disposable” drinks on the shelves must be clearly labeled, and that manufacturers will have to pay lower fees for recyclable packaging – the exact amount which is not yet specified – in order to boost recycling rates.

It also will oblige producers and manufacturers to join a Central Packaging Register Office in order to better monitor and enforce how plastic is used.

In April 2016, Germany enacted a law requiring shops and department stores to charge for the use of plastic bags. Following this example, said Schulze, retailers also commit themselves to avoiding unnecessary packaging, such as that used for fruit and vegetables.

Some retail chains already have such initiatives and test runs. REWE, for example, has started labeling products such as avocados and bananas with a laser light rather than plastic.

There has been an increasing focus throughout the EU on cutting back on plastic packaging. In October, the European Parliament backed a ban against single-use plastics such as straws and cutlery. They aimed to cut down on a growing amount of plastic waste ending up in the oceans.

‘Plan B is missing’: A Mixed reaction

“Overall, there is little new to be seen from the Environment Minister. Rolf Buschmann of BUND said that a “Plan B is missing” in the event that the plan did not come through.

However the municipal utilities praised the tap water initiative, pointing out that water should not be treated differently just because no “label is stuck on it,” said a spokesman for the Association of Municipal Enterprises.

Many consumers in Germany turn to plastic due to its ease of use without first considering the consequences, said Ria Schäfli of Original Unverpackt in Berlin, one of the first grocery stores in the world to sell products without packaging.

“Plastic in our societies is a material which is considered clean and efficient. It's durable and easy to clean It fulfills many uses,” Schäfli told The Local. “We've started to buy these portion sizes where it's just for one meal…Sixty years ago nobody did this and it worked out just fine.”