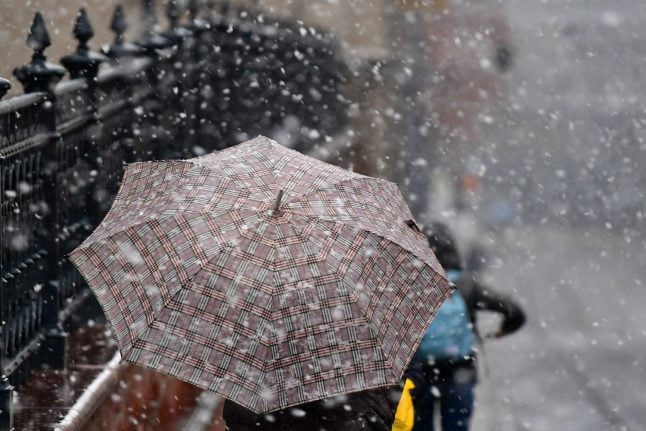 A pedestrian uses an umbrella against the first snow fall in Halle in eastern Germany on Tuesday. Photo: DPA

Much of Germany was struck by snow on Tuesday, with the German Weather Service warning drivers to be cautious as they took to icy roads with heavy winds. For many cities, the white weather marked the first snow fall of the season.

The central part of the country was hit particularly hard. Between 11 a.m. and 2 p.m in Thuringia there were nearly 85 accidents as a result of the snow, police reported. A total of 13 people were injured as a result. “Drive safely!” local police warned on Twitter.

In the south, the cold and cutting east wind continues to blow, making it feel much colder than the 3 to 4 degrees indicated by the mercury. North of the Danube, it began to snow in the morning, with the snow continuing throughout the day.

The white winter weather also came on Tuesday to Saxony and Thuringia, and in the afternoon also in Hesse, North Rhine-Westphalia, Lower Saxony, Saxony-Anhalt and Bremen, which recorded snow fall between 2 and 5 centimeters.

Snow cover between 2 and 5 cm formed in Bremen. Yet the snow fall reached up to 10 cm in areas with heavy traffic congestion.

Up to 10 cm of fresh snow accumulated in congested areas. Motorists should be prepared for heavy snowfall on motorways and slippery roads.

The snowfall, however, was enjoyed by dogs wandering in the less populated Thuringia Forest, as DWD tweeted. There, snow reached up to 12 cm.

The DWD also tweeted a map on Tuesday at 3 p.m. issued a warning for parts of the country affected by light snow (in yellow) and hence icy roads.

From Wednesday on: weather turns cold yet calm

In the night before Wednesday morning, the snow will continue to fall as the cold east wind decreases. However, it can also become significantly colder amid the fresh snow.

During the day, however, the weather will be much calmer, with cloudy and foggy weather. The day is marked by clouds and fog.

If it gets to be too cold on the ground, there is a risk of freezing rain – particularly dangerous in the valleys in the middle of Germany (such as Hesse and Thuringia), where the maximum temperatures are likely to be between 0 and 7 degrees. The first snow of the season in Bad Wünnenberg in North Rhine-Westphalia on Tuesday. Photo: DPA

Thursday will again be marked by cloudy weather, but on Friday it will become a little warmer.

The weather will remain calm until the weekend. On Thursday the clouds still dominate the sky. On Friday it gets more pleasant and a little warmer. On the weekend, however, mostly rainfall is expected throughout the country, and light snow.