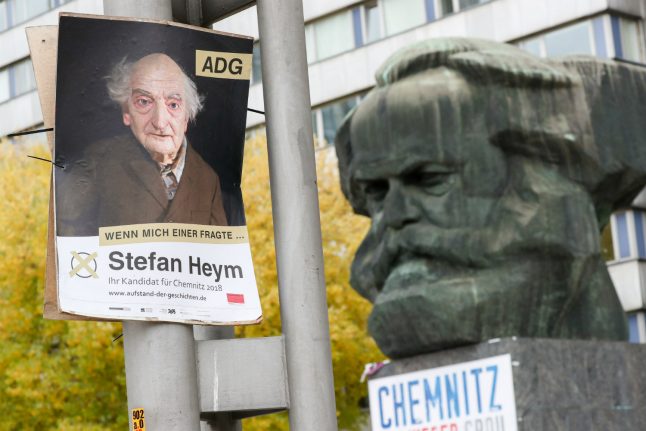 The election-style posters in Chemnitz are part of an art festival. Photo: DPA

There are no elections coming up in Chemnitz, but posters with slogans adorn the square where the Karl Marx statue stands in the centre of the Saxon city.

But look closer and you’ll find an image of the late Chemnitz-born writer and renowned anti-fascist Stefan Heym featured on the election-style posters.

It's all part of an arts festival: ‘Aufstand der Geschichten’ (Uprising of Stories), that’s taking place in the city from Saturday until November 10th.

The event, along with a new biennial multimedia art festival called 'Pochen', is helping to create a more positive atmosphere in the eastern German city that was marred by xenophobic protests at the end of August and in September, following the fatal stabbing of a German man with Cuban heritage. A Syrian and Iraqi man were detained in connection with the incident and investigations continue.

Doreen Mölders, spokeswoman and co-organizer for the Pochen festival, said she hoped both art events, which will feature plays, films, readings and exhibitions among other activities, will help to show a different side to Chemnitz.

“We all live in Chemnitz and we think it needs positive vibes,” she told The Local.

“It’s a really industrial city but Chemnitz has so many other things going on, and lovely people. We want to show the city has a deeper cultural influence.”

Mölders said that along with the ‘Aufstand’ festival, she hoped both projects could “help find other narratives for our identity”.

“We are trying to give another story of the history, of the region, for the people from this region,” she said.

“They don’t need to feel lost or forgotten, or whatever they feel at this moment, that makes them want to go out on the street and take part in these demonstrations or go to the right-wing (organizations).”

Stories about the region

Pochen aims to tell history and stories, with painting, sounds, words, installations, light and audio/visual performances. The event will be held every two years and will focus on a theme closely linked to the city, its people and identity. It runs up until November 18th.

A view of the #WirSindMehr (we are more) concert held in September to counter far-right protests in Chemnitz.

The world 'Pochen' roughly translates to ‘knocking’ or ‘beating’. It is also a nod to Chemnitz’ history as a mining region where workers would ‘Poch’ or ‘tap’ to extract materials.

This year the theme is Wismut, a Soviet-owned company which mined uranium during the German Democratic Republic (GDR) era and had a huge impact on the area.The festival’s subhead is 'Tage des Aufbruchs', which translates into 'Days of the Pioneers'.

“Wismut caused a lot of conflict and had a big impact on Saxony and Thuringia, where it was based,” said Mölders.

“With our festival we want to remember the issues and let younger people know about the history.”

Exhibition venues include the Hartmannfabrik, the Archaeology Museum and the Borssenanger Gallery. But the façade of Chemnitz Central Station and a department store in the city centre also form an artistic playground.

The volunteers wanted to show contemporary art that didn't cause any intellectual headaches. “It's not a matter of explaining this conflict-laden theme, but of using art to create new approaches,” explained Mölders, who works as a curator.

The biennale wants to entertain and deliberately distract. “The atmosphere here in the city was quite depressing in August,” said Mölders, referencing the far-right protests. “It is slowly rising again, but you can feel the bubbling under the surface every day.”

The festivals will be launched on Saturday evening by federal family minister Franziska Giffey (SPD) at the State Museum of Archaeology.

In cooperation with the Theatre Chemnitz, an event called 'Uprising of things' will feature machines and everyday objects from Chemnitz that describe people’s view of the upheavals and change which took place after the Berlin Wall fell in 1989, paving the way for German reunification.

It is those untold experiences that reach into the current debate, project manager Franz Knoppe told DPA. “Our idea is to tell stories of upheaval beyond the right-left debate and in this way perhaps find answers to today's questions,” he said.

The festival has been in the pipeline for more than a year, and it’s hoped it will help to reshape Chemnitz' reputation after the protests.

“We're hoping to attract people from elsewhere in Germany, and we want to reach other cities and international visitors, too,” said Mölders.

And even Stefan Heym, who died in 2001 at the age of 88, will get his say: he will return to his native city – as a young and old Heym – in the form of two lifelike puppets.

When the events featuring the writer take place on November 7th and 9th, observers will be able to find out what he and his city have to say to each other in the present day.

With additional reporting by DPA.