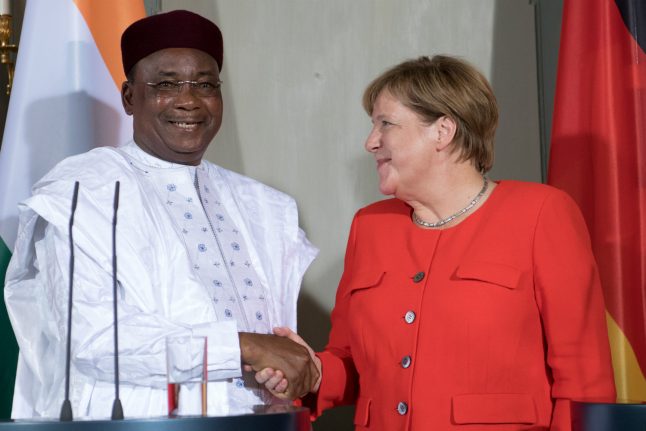 Angela Merkel welcomes the President of Niger, Mahamadou Issoufou, to Meseberg Castle in Brandenburg during a meeting in August this year. Photo: DPA

Niger is a transit country for thousands of migrants heading to Libya and Algeria, key hubs for migrants trying to reach Europe.

Under the new plan, the two European nations will disburse €10 million to finance the new force, according to EUCAP Sahel, which provides support for Niger security forces.

The funds would be used for training and equipping hundreds of Niger police officers.

“Roughly speaking, it is to combat all our challenges: illegal migration, human trafficking, drugs, terrorism,” said Souley Boubacar, head of the Niger police.

In the first phase, two companies of 250 Niger police will be positioned at Maradi and Birnin Konni — two regions on the troubled frontier with Nigeria that have become a key crossing point for migrants heading for Europe — a security source told AFP.

It came after Germany held talks with Niger earlier this year, which took in discussions on migration issues. Angela Merkel welcomed the President of Niger, Mahamadou Issoufou, to Meseberg Castle in Brandenburg during the talks.

The EU has been grappling with massive migration from Africa and the Middle East since 2015.

Niger has become one of the main crossing routes for poor migrants, with 90 percent of West African migrants passing through the country, according to the EU.

The Saharan route is notorious for its dangers, which include breakdowns, lack of water and callous traffickers who abandon migrants in the desert.

Niger introduced a law making people-smuggling punishable by a jail term of up to 30 years in 2015.

In July, European Parliament President Antonio Tajani said the flow of migrants through Niger fell by 95 percent between 2016 and 2017.