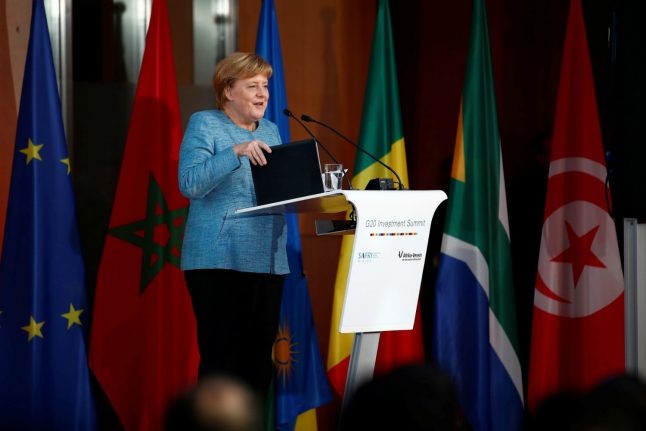 Merkel at a 'Compact with Africa' conference Tuesday in Berlin. Photo: DPA

When Donald Trump became US president, liberal commentators turned to the German chancellor as a potential new “leader of the free world” — a label she swiftly dismissed as “absurd”.

Her moderate, consensus-seeking approach and staunch defence of the multilateral world order have made Merkel a counterpoint to Trump's “America First” isolationism at international meetings.

But political analysts say it's hard to predict what impact the exit of the world's most powerful woman, now down in the calendar for 2021, will have on global affairs.

Cas Mudde, a politics professor at the University of Georgia in the United States, said that whoever takes over at the head of Europe's biggest economy will struggle to wield the same international clout.

“That is the hole she leaves — that of senior political leader within Western democracies,” he told AFP.

Already weakened in domestic politics, he predicted that setting a clock will “further erode her national and international power, which remains, however, significant.”

SEE ALSO: 'End of an era': What you need to know about Merkel's planned departure

Germany has trod cautiously on the global stage since World War II, wary of throwing its might around for fear of spooking neighbours.

But within Europe Merkel has carved out an influential role as a broker, not least in the 2010-2015 Greek economic crisis and in leading the bloc's response to Russia's annexation of Crimea in 2014.

With Europe already badly divided by Brexit and a wave of migrant arrivals, officials and analysts in Brussels fear her announcement spells yet more uncertainty for the EU.

The Capital Economics consultancy said her announcement was bad timing given the major row that has just broken out over Italy's big-spending budget.

“The eurozone needs a safe pair of hands more than ever and Mrs Merkel has  been key to brokering compromises in the past,” it said in a briefing note.

“Her weakened position may mean that an agreement over Italy's budget will take longer to reach, raising the threat of contagion to other markets.”

French President Emmanuel Macron has meanwhile worked hard to win Merkel's support for a profound shake-up of the EU.

“Lots of the president's initiatives would not have seen the light of day of if it wasn't for strong German support,” France's Europe Minister Nathalie Loiseau told AFP, naming closer defence ties as an example.

But Merkel's support for Macron's ambitious institutional change was already lukewarm and is now in further doubt, with pro-EU commentator Gideon Rachman writing in the Financial Times that her announcement was “bad news” for the reforms.

Some analysts suggest Merkel's clout in general in Europe, where she has notably pushed for close ties with post-Brexit Britain, will take an immediate hit.

“Nobody is going to listen to her anymore in Europe. She has taken herself immediately out of the game,” said Sebastien Maillard, director of the Jacques
Delors Institute think-tank.

Yet Nils Diederich, a political scientist at the Free University of Berlin, predicted she will continue to act as a moderator in tense EU disputes, like those it faces with Italy and Hungary.

“In recent months it's become obvious that (European affairs) represent her
primary interests. She is Germany's real foreign minister,” he told AFP.

Coming a day after Brazil elected a far-right president and with populists on the march across Europe and beyond, Merkel's announcement also signals the decline of a leading voice against nationalism.

Some predict her successor at the helm of the conservative CDU party will shift further right in response to the rising far-right AfD party in Germany – a phenomenon spurred in large part by Merkel's 2015 welcome of more than a million refugees.

Mudde, who studies populism on both sides of the Atlantic, said however that Macron and Canada's Prime Minister Justin Trudeau had long since taken over as the world's leading defenders of liberal values.

“Merkel has been on her way out for a long time,” Mudde told AFP. “I think Macron has become a much more vocal opponent of nationalism than Merkel,” he added.