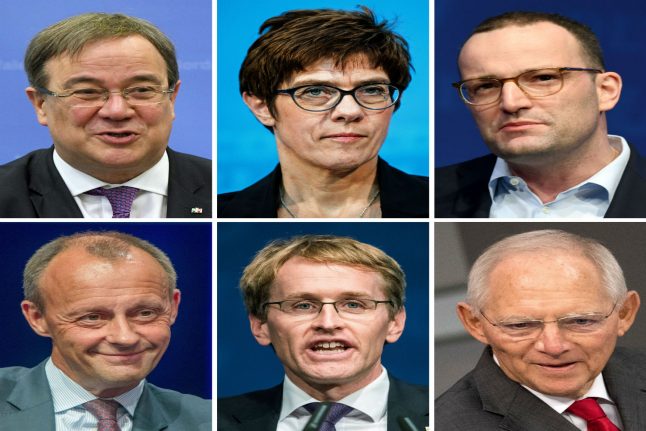 Here's a look at the top expected candidates.

Elected state premier of Germany's most populous region North Rhine-Westphalia just last year, 57-year-old Armin Laschet could emerge as the compromise candidate to heal divisions that have torn at the CDU under Merkel.

A political veteran who has served in the Bundestag national parliament and the European Parliament and as family minister in Merkel's first government, Laschet has often backed her moderate course.

He can count on the support of Merkel critic Christian Lindner, who heads the liberal Free Democrats and recently said Laschet “has what it takes to be chancellor”.

Known as the “mini-Merkel”, 56-year-old Annegret Kramp-Karrenbauer —
former state premier of tiny Saarland — is a loyal follower of the chancellor's centrist line that has shaped CDU and German politics over the past two decades.

At Merkel's initiative, she became party general secretary in February, the
number two spot offering a leg-up towards taking the helm.

Often referred to by her initials “AKK”, her Catholic views overlap more with the conservative wing of the CDU than Merkel on social questions like abortion or gay marriage.

Just 38 years old, right-winger Jens Spahn is seen by many as the “anti-Merkel”.

The chancellor named him health minister in her fourth government to
appease the CDU's right wing, but he hasn't held back from criticizing what he sees as her overly “social-democratic” party line.

He has sharpened his profile through meetings with conservative darlings
like Austrian Chancellor Sebastian Kurz and US ambassador to Berlin Richard Grenell, a prominent supporter of President Donald Trump.

A picture of Grenell and Spahn, who are both openly gay, posing with their
respective partners after a casual dinner in Berlin made headlines in Germany.

Friedrich Merz, 62, has never forgiven the chancellor for driving him out as head of the party's group of MPs in the Bundestag in 2002.

Like Spahn, financial policy expert and social conservative Merz has complained that Merkel led the CDU too far to the left.

He quit the Bundestag following his defeat at her hands, returning to work as a lawyer and heading the supervisory board of mammoth asset manager Blackrock's German arm.

Since June 28th, CDU politician Daniel Günther has served as Minister President of the northern German state of Schleswig-Holstein. He was elected president of Germany’s Bundesrat, or Federal Council, on October 19th.

A practicing Catholic, he has pushed to uphold traditional German values and traditions. In March 2016, he said that pork should remain an offering at German workplaces and schools – a reaction to the large Muslim influx during the refugee crisis of 2015.

In his last role as Federal Minister of Finance, he served on the German committee to discuss how to proceed with Brexit.

He supports a wide range of issues, from better transatlantic relations to more stronger policies to combat domestic terrorism.