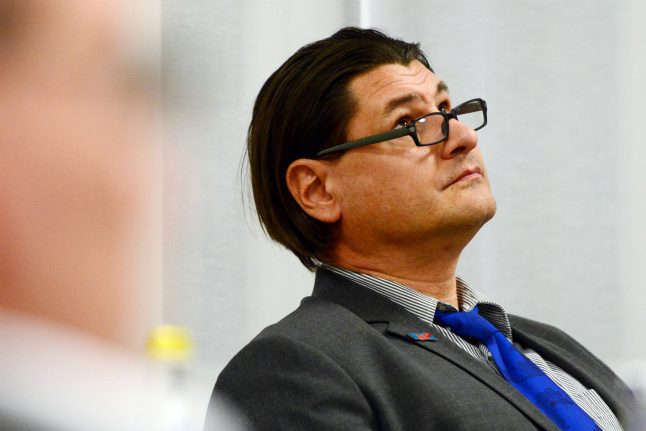 The AfD's Mario Lehmann in the state parliament in Magdeburg. Photo: DPA

The parliament in the eastern German state is dealing with the fierce dispute between the two AfD state delegates, according to the Mitteldeutsche Zeitung newspaper.

Lehmann, a 48-year-old former policeman, allegedly threatened and attacked his colleague Schmidt in a toilet during an AfD retreat at the end of September.

According to the report, Lehmann allegedly called Schmidt a “spinner” and threatened him by saying that if he said “something” about him or his daughter again, Lehmann would force him into a “dark corner” and beat him “green and blue”.

Lehmann then allegedly punched Schmidt in the kidney area. Lehmann reportedly had followed Schmidt into the toilet unnoticed, and the incident happened at the urinal.

According to information obtained by the MZ newspaper, Schmidt wanted to call in the LKA (state criminal police office) to ask for protective measures. He also informed the president of the state parliament, Gabriele Brakebusch (CDU), as well as requesting a form of protection in parliament, which sits in Magdeburg.

Both men see each other regularly during meetings and while working.

Brakebusch confirmed there had been a conversation with an AfD delegate. She said: “A member of the AfD parliamentary group approached me as president and asked for a confidential discussion.”

She could not disclose any details but added: “You can assume, however, that I have taken all necessary steps and that I have addressed the interior ministry.

The public prosecutor's office in Magdeburg confirmed receipt of Schmidt's complaint, but said that proceedings had been discontinued. The complainant could, however, look into taking private legal action.

Prosecutors can discontinue cases due to several reasons, including a lack of public interest in prosecution.