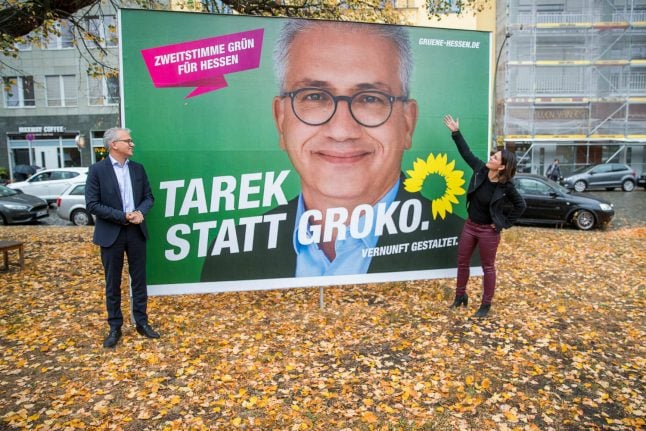 Already Hesse state's most popular politician in opinion surveys, the 47-year-old Yemeni-German could become kingmaker or possibly even state premier in the region home to Frankfurt, Germany's banking and air transport hub.

It would be a stunning rise for one of Germany's few politicians with an Arabic background, at a time when the far-right and anti-immigration Alternative for Germany (AfD) party has made strong gains.

The left-leaning and ecologist Greens have been polling strongly nationwide this year, in part because they have opposed most consistently the AfD and propagated an open and multicultural society.

The party, who emerged out of the 1970s peace and anti-nuclear movements, have also been the leading voice warning of climate change and automotive air pollution, issues that increasingly concern voters.

This year the Greens have also benefited from growing turmoil within Merkel's loveless “grand coalition” which has alienated voters with infighting, mostly centred on immigration.

While Merkel's CDU and her partners the Social Democrats (SPD) have both slipped by 10 percent or more in polls since Hesse elections five years ago, the Greens have doubled support to around 20-22 percent now.

This would make them the second strongest party behind the CDU, which is now polling at 26 per cent, opening up a range of possible coalition scenarios.

'Open to the world'

In Hesse, the Greens have been the junior governing partners to the CDU's state premier Volker Bouffier, and Al-Wazir has served as his economy, energy and transport minister.

Al-Wazir attributes his party's new fortunes to their “clear stance” against the AfD, which has railed against Merkel's decision to keep open German borders to a mass influx of mostly Muslim migrants and refugees.

“All other parties have gone crazy about the AfD,” he told conservative daily the Frankfurter Allgemeine Zeitung.

“We defend a society that is open to the world and multifaceted.”

Al-Wazir himself was born to a German teacher, who would take her son to street demonstrations, and a Yemeni diplomat, Mohamed Al-Wazir.

The politician has recounted discrimination he faced in the 1970s in a society that, he recalls, labelled Italians “spaghetti eaters” and considered him a “foreigner”.

When he was born, a civil servant advised his parents to give him a German second name, suggesting Fritz — a proposal they declined.

Only after a legislative change in 1975 was Al-Wazir able to assume German as well as Yemeni citizenship.

He grew up in Offenbach, a medium-sized city which has the largest proportion of people with a migrant background in Germany, at over 62 percent.

At age 14, he left for Sanaa where his father lives and for two years attended an international school, a time he says allowed him to “discover the other half of (my) origins, to get to know my family and to learn Arabic”.

When the Berlin Wall fell in 1989, Al-Wazir, still in a German high school, joined the Greens in Hesse, the home state of party veteran Joschka Fischer who went on to serve as Germany's foreign minister from 1998 to 2005.

When he was 24, Al-Wazir joined the regional parliament and quickly rose to lead the party in the chamber.

Today, the father-of-two, who is married to a Yemeni woman, is regularly voted the most popular politician in Hesse state.

This week, amid growing international outrage over the Saudi killing of a dissident journalist, Al-Wazir made a strong plea for an end of German arms shipments that could worsen the war in Yemen.

Calling the bloody conflict in his father's country “the world's worst man-made humanitarian catastrophe”, Al-Wazir said that “now it is high time to change the policies of Germany” on defence exports.