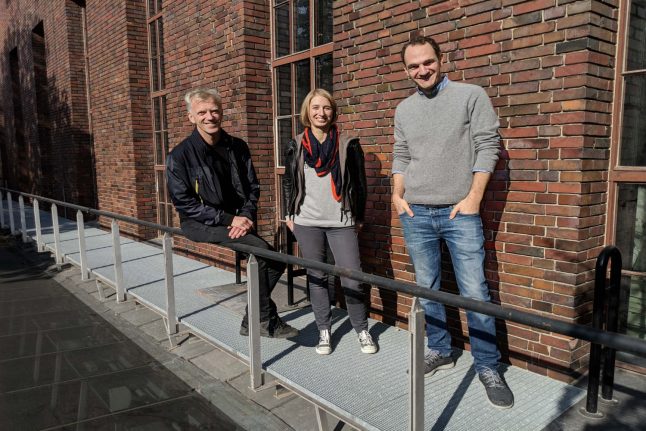 Jörg Richert of KARUNA, Carolin Silbernagl of Betterplace and Rowan Barnett from Google in front of the Umspannwerk. Photo: Google

First announced in November 2016, the company intended to transform part of the Umspannwerk, a former electric substation on Ohlauer Straße, in the Kreuzberg area, into a Google Campus.

It would have been its seventh after London, Tel Aviv, Seoul, Madrid, São Paulo, and Warsaw.

But, in a turnaround, the company said the site would now go to online donation platform Betterplace and the KARUNA association, which supports children and young people in need.

A few days ago, Google handed over the keys of the former substation to the two organizations.

Since Google announced its plans to open a campus where start-ups could go through a mentoring program led by the firm, there have been numerous protests against the project.

Opponents feared that Google would be a catalyst for gentrification in a neighbourhood that is struggling with rising rent increases.

In September, activists occupied the substation for several hours before the police intervened.

So has Google given in to the protests?

Ralf Bremer, spokesman for Google, told the Berliner Zeitung: “We don't let protests dictate what we do.

“In recent months, many talks have been held with stakeholders such as Karuna, Betterplace and other social organizations in the neighbourhood and it has been concluded that the new concept for the substation is the best solution for Kreuzberg.”

SEE ALSO: Google is coming to Berlin Kreuzberg and locals are from happy. Here's why.

Google's commitment to start-ups will continue in Berlin, though. The team led by Rowan Barnett, who is responsible for Google's start-up funding, will soon move into offices in in the city's Mitte area.

Barnett tweeted a picture of the key handover to the two social organizations, and said: “We are delighted that the Google Campus substation will be a home for social commitment! We hand over the rooms Betterplace and Karuna and we are convinced that they will create something very valuable for Berlin!”

According to Bremer, a new campus will not be built in any other part of Berlin for the time being.

Jörg Richert of KARUNA welcomed the move. He said the organization had been looking for a place in Berlin for a long time.
“Our social cooperative unites 84 individuals, organisations and companies,” he said.
Richert added that the space will help young people form ideas and visions for the future.
“In essence, we want to prove that inclusion can succeed,” he said.

The news has been met with approval by local activists who have campaigned regularly and placed posters  across the Kreuzberg area urging Google to  stay away from the site.

It's resulted in mixed political reactions.

Greens MP Ramona Pop, a member of the Berlin Senate's economic administration, said the move showed the “increasing importance of socially and ecologically oriented companies and the non-profit economy” in the city.

“There is a lot of potential for solving social challenges at the interface between social-ecological management and innovative tech solutions,” she added.

Free Democrats (FDP) faction leader Sebastian Czaja, however, said the move sends a message to future companies and investors not to come to Berlin “and certainly not to Kreuzberg”.

Christian Gräff, economic policy spokesman for the CDU parliamentary group, said it was a “severe setback” for business.

“Berlin's reputation has been badly damaged as a result,” he said. 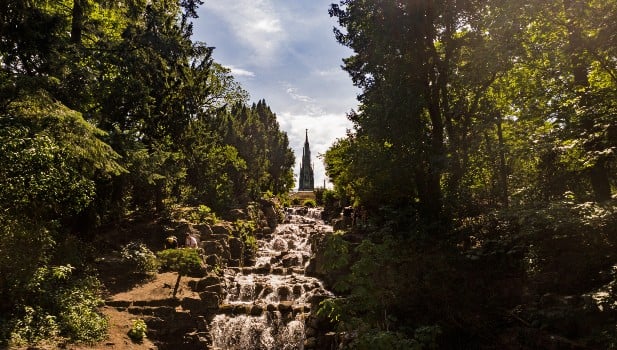 Where is the Berg?

Kreuzberg literally means “cross mountain”, which seems like a strange name for an area that has about as many undulations as a snooker table.

The word Berg, somewhat confusingly, can also refer to Germany’s highest mountain – Zugspitze – but can just as well be used for a bump in an otherwise flat landscape.

In our case it refers to the 66-metre high “hill” in Viktoria-Park in the southwestern corner of the neighbourhood, which is home to a monument to the struggle against Napoleonic occupation.

READ ALSO: How to understand Berlin through its landmarks with quirky nicknames

Originally, the hill was called the Tempelhofer Berg, but the name was changed to Kreuzberg due to the fact that the monument is crowned with an iron cross.

The Berg offers some rather good views over the city and it also has something rather unique for Berlin – a waterfall that cascades down to the park below.

Until the middle of the 19th century, the Berg was situated outside the city. In those days the Hallesches Tor was Berlin's southern entrance.

But the city grew rapidly during the second half of the 19th century and several parts of what is now Kreuzberg were incorporated into the capital.

While some of the architecture is very beautiful, the neighbourhood was known for its Mietskasernen (literally rent barracks) which are large houses with several courtyards which were constructed as tightly packed housing for the working and lower-middle classes.

The neighbourhood’s population has more than halved from a high point of 380,000 in the 1920s, but it is still one of the most densely populated places in Germany.

A reputation for left-wing rebellion

Kreuzberg was famous for a long time for its squatter scene.

During the Cold War, the neighbourhood suddenly found itself right up against the wall at the edge of west Berlin. No longer desirable, many of the houses were deserted. Squatters moved in – with no one much caring as long as the wall still stood.

But in the 1990s the property owners wanted their building back and the police were sent in to clear out the squatters. This led to some pretty fiery street fights, with May 1st becoming known as a day of pitched battles between police and the occupier scene.

You can learn more about the history of left-wing activism at the FHXB museum, which is situated close to the neighbourhood’s main junction, Kottbusser Tor.

Another legacy of the Cold War is Kreuzberg's multicultural vibe. The district is split in two by the Landwehrkanal with the area north of the canal, commonly known as SO36 after its old post code, being a bit grittier.

S036 was enclosed by the Berlin wall on three sides. This meant that flats there were very cheap in the 60s and 70s and many Turkish migrants moved in, earning it the nickname little Istanbul. Today it is still a neighbourhood full of Turkish restaurants. The south side of the district is the opposite of the north side in many ways. The streets are characterised by scenic Altbau architecture that was largely spared from bombing during the Second World War. The centre of the west end is the famous Bergmannstraße, which is bustling without boutique shops and restaurants.

It should come as no surprise that Kreuzberg has its fair share of of art house cinemas given its reputation for being a mecca for artists and Lebenskünstler (literally life artist, referring to someone who manages to make the best of life).

One of the most distinct are the FSK Kino near Kottbusser Tor, where guests enjoy independent films while sitting in old airplane seats. Another unique Kino is the Sputnik, which is at the top of five flights of stairs and which offers film viewings in rooms that are more like sitting rooms than cinemas.

Boating on the canal

While boating might sound posh, doing it on the canal in Kreuzberg is a much louder affair than what is common in more sedate cities like Cambridge.

In the summer, residents of the district like to take inflatable boats onto the Landwehr canal and potter around in patterns that don’t involve very much rowing. On the other hand there is plenty of techno music blaring out of speakers and the distinctive smells of home made cigarettes. As its reputation as a centre of left-wing rebellion has receded in the face of gentrification, Kreuzberg has become better known as a foodie’s paradise. A couple of market halls in the district stand out as places that you have to visit to enjoy Kreuzberg's newest flavours.

Markthalle Neun in the northeast is famed for its hip street food stalls. You can also just go there to do some food shopping. The products certainly aren’t cheap but stalls like Kumpel and Keule butcher are known for the quality of their produce.

In the west of the city the Marheineke Markthalle isn’t quite as cool. But it is also known for the high quality of food on offer. 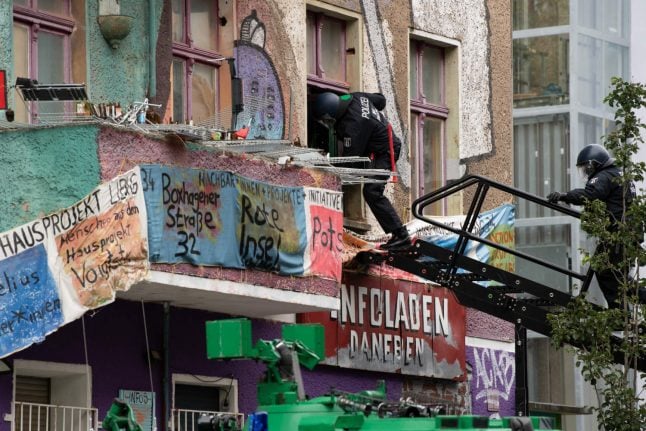 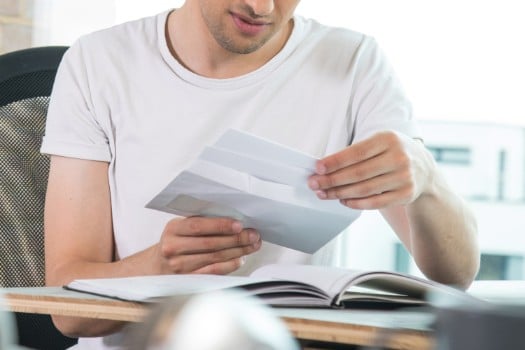 RENT
How a cryptic letter from your Berlin landlord could save hundreds in rent
Url copied to clipboard!