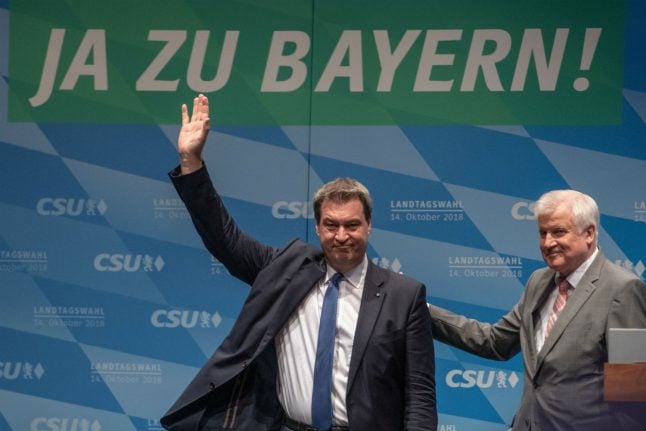 The state elections are taking place on Sunday and commentators believe it will be a “historical” moment for politics in the prosperous state – as well as for the rest of Germany. The conservative Christian Social Union (CSU), the sister party of Chancellor Angela Merkel’s Christian Democrats which only exists in Bavaria, has run the state for decades.

The only question in recent elections has been about how large the CSU’s majority will be. But the party’s power is expected to weaken quite dramatically.

Well, yes. Opinion polls have shown that the CSU is likely to fall well below the typical 40 percent mark.

The most recent survey published by Bild on Tuesday, placed the CSU at 33 percent, while a poll by ZDF on Friday showed the party at 35 percent.

To put it into context: Tuesday's poll placed the Social Democrats (SPD) at 10 percent, the Alternative for Germany scored 14 percent, while the Greens reached 18 percent. The Free Democrats (FDP) received 4.5 percent in the latest poll.

Professor Heinrich Oberreuter, a political scientist who has taught at the Free University Berlin and the University of Passau, among others, predicts that the CSU will gain about 35 percent of the votes on Sunday, “historically a disaster and a loss of 12 percent”, says the political scientist. The party secured a majority of seats in the last election in 2013 after winning nearly 48 percent of the vote.

“This will be an election of historic dimensions,” says Oberreuter, stressing the unusual situation and changing face of politics in Bavaria. The CSU will have to find a coalition partner if it wants to stay in power. So primarily, the vote will affect the political culture in the region but it will also send shock waves to Berlin, and its sister party in the Bundestag, the CDU. Green Party leadership of Bavaria at a so-called Parteitag on Sunday to meet supporters. Photo: DPA

There are different reasons. Oberreuter says it’s because “strategic mistakes” have been made since 2015, especially connected to the refugee crisis and Merkel’s open borders policy.

Oberreuter says the CSU, and especially chairman Horst Seehofer’s bickering with Chancellor Merkel over these issues, has damaged the party’s overall popularity, affecting their “credibility”, he says. In July, the CSU almost brought down the government by insisting on a new regime for turning away refugees at the Bavarian border.

The controversies destabilizing the CDU and CSU have done the party no favours. Seehofer may be punished by voters for his role in the Hans-Georg Maaßen debacle, which saw the head of Germany’s domestic intelligence agency sacked for revealing information without evidence to a newspaper, and then promoted – but demoted after an outcry.

This story dominated German media for weeks. It didn't make the CSU – or, for that matter, the CDU – look good.

Although they put on a united front at a CSU pre-election event in Bavaria on Monday, there’ve also been internal struggles connected to the bitter rivalry between Seehofer and Markus Söder, who succeeded Seehofer as Bavarian state premier, in a shake up following last year’s poor federal election results.

Last week Seehofer rejected joint responsibility for the weak poll results of his party – and took a dig at Söder. “In the last six months, I have not interfered, either in Bavarian politics or in election campaign management,” the Interior Minister told the Süddeutsche Zeitung on Saturday.

“That is the personal prerogative of state premier Markus Söder. He is responsible for strategic considerations during the election campaign,” Seehofer said.

Meanwhile, Söder has made clear that he believes the poor poll results are “influenced by Berlin politics”, pointing the finger at the grand coalition.

“Seehofer's popularity has dropped, absolutely, much more than Merkel's popularity,” says Oberreuter of the Interior Minister. According to former Bavarian minister president Edmund Stoiber, the CSU's popularity dip is due to social changes in Bavaria.

SEE ALSO: Bavaria – the reality behind a state defined by kitschy cliches

“In the past years there has been unique migration to Bavaria due to our economic success”, the CSU honorary chairman told the editorial network Germany on Wednesday.

“More than one million people have come to us from all parts of Germany in the last ten years”.

Who are the CSU anyway?

The party was founded in 1945 and has ruled the wealthy southern German state, home to multinational mega-bucks firms such as Siemens, BMW, Audi, Adidas, and Allianz, with an absolute majority for most of the post-war era.

That strength has made the CSU a key but often stubborn partner for its sister organization, the Christian Democrats, which is active in every German state except for Bavaria.

Who are the winners going to be?

It's already being argued that the real winners are the Green party. Not because they are top, but their gains are likely to be the highest. Their latest poll results of 18 percent show they are the second strongest force in Bavaria behind the CSU.

At a pre-election event, head of the Green party Robert Habeck along with the top candidates Katharina Schulze and Ludwig Hartmann, declared the state elections “a historic opportunity for a different policy”. Habeck said: “Here in Bavaria, democracy is finding its language again.”

Whether the Greens will enter coalition negotiations would have to be decided at a party conference on October 20th in Regensburg, reports DPA.

SEE ALSO: Green Party has highest number of members in its history

Commentators aren't sure if this combination will work. Edmund Stoiber said he couldn't envisage a CSU/Greens coalition. “There are fundamental differences between the CSU and the Greens,” he said. “These range from environmental and energy policies to the economic policy up to and including internal security and migration policy.

“I don't see how a stable alliance could be possible with these differences,” he added.
As fringe parties like the Greens and the AfD are gaining at the expense of the mainstream parties, new state-level alliances such as the possible CSU-Greens coalition could signal to future pacts at national level.
“We are in the twilight period of Merkel's rule in Germany,” Sudha David-Wilp of think-tank the German Marshall Fund told AFP.
“And the CDU/CSU will have to think about what kind of coalition they'd like to form if they want to stay in power when the next federal election comes around.”

What’s important to people who live in Bavaria?

Immigration is on the minds of voters in southern Germany, similar to the rest of the country. But Bavarians are also concerned about lots of other matters, from rising rents and living costs, to childcare, tax and small business matters.

The CSU is more conservative than the CDU, especially on religion and law enforcement, but it is on the left of its sister party on social welfare issues -hence the 'social' in its name. All these things will be on the minds of Bavarians when they go to the polls on Sunday. Mal sehen (let's see).