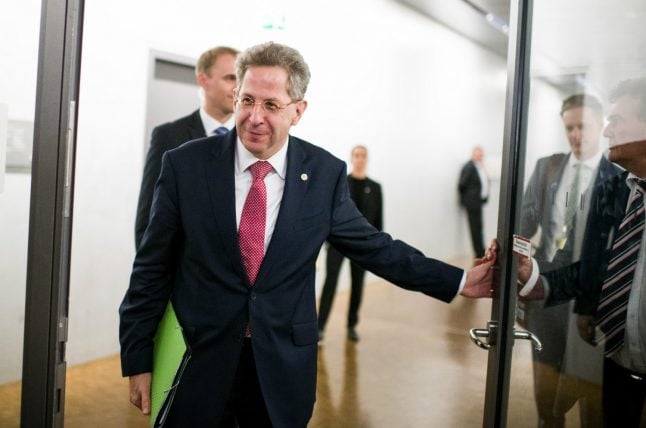 As it turned out, it was an interview with Germany's best-selling daily Bild that cost the 55-year-old his job.

But the saga doesn't end there, as Maaßen will now take up a position as state secretary in the Interior Ministry – effectively a promotion as Zeit reports that he will earn €2,580 more per month in the new job.

After anti-migrant protests rocked the eastern city of Chemnitz in late August, Merkel firmly condemned a “hunt against foreigners” backed by videos circulating on social media, but Maaßen challenged the authenticity of at least one of the videos.

For critics, Maaßen's claim played into the hands of the far-right, such as the AfD party, which immediately seized on the spy chief's assessment to blast Merkel and mainstream media for maligning it and other like-minded protesters.

As pressure mounted on him to prove the video was a fake, Maaßen denied questioning its authenticity and said his quarrel was with how the original post on Twitter had oversold it as a “hunt against people” which he thought was intended to inflame tensions.

But the uproar raised questions over Maaßen 's neutrality, particularly as he has made no secret of his opposition to Merkel's liberal refugee policy that has allowed in more than a million asylum seekers since 2015.

It also made him a hero of right-wing extremists claiming Maaßen was a maverick with the courage to criticize Merkel, now in her 13th year as chancellor.

Married to a linguist from Japan, Maaßen was born in Mönchengladbach, in North Rhine-Westphalia, close to the Dutch border.

The man with the round gold-rim glasses who favours three-piece suits is a trained lawyer who wrote a thesis on “the legal status of the asylum seeker in international law”.

He was heading the interior ministry's counter-terrorism team when the US was ready to free Murat Kurnaz, a Turkish citizen and German resident, from Guantanamo Bay after finding that accusations against him were groundless.

Berlin was reluctant to take Kurnaz back, and Maaßen at the time found the legal justification to bolster Germany's case as he argued successfully that the Turkish man had lost his residency rights because he had been away for more than six months from Germany – although this was due to Kurnaz's imprisonment.

Maaßen took over in 2012 as chief of Germany's Federal Office for the Protection of the Constitution (BvF) in the aftermath of a devastating neo-Nazi cell scandal.

The agency's reputation was in tatters after it was revealed it shredded files related to suspects in the NSU (National Socialist Underground) cell that carried out a series of racist murders.

Maaßen said he felt like the “city building director of Cologne after World War II” as he took the helm.

Over the last six years, Maaßen  turned the agency back into a respectable intelligence institution that politicians and the media turn to for assessments on risks for Germany.

With an eye on the Islamist threat, he viewed skeptically Merkel's decision in 2015 to keep Germany's borders open to asylum seekers.

He had warned as early as September 2015 that Islamists may recruit asylum seekers under the cover of providing humanitarian assistance.

But he came under intense pressure following a terror attack at a Berlin Christmas market in 2016 when Tunisian failed asylum applicant Anis Amri rammed a truck into crowds.

According to media reports, Maaßen  wrongly claimed his service had no agent in Amri's circles, even though it had a source at a mosque the Tunisian frequented.

Contacts with the AfD

But it is his handling of the far-right AfD party that has proved most controversial.

Despite repeated calls for the BfV to formally place the AfD under surveillance, Maaßen  has refused to do so.

A former AfD member has also accused him of having met repeatedly with the party's leaders to give advice on how to avoid being placed under surveillance – an allegation Maaßen and the far-right group have denied.

AfD leader Alexander Gauland told journalists this week he had three conversations with Maaßen about “overall security evaluations”. Maaßen did not give him advice, he added.

For critics, the allegations made Maaßen 's position untenable.

Heribert Prantl of the daily Sueddeutsche Zeitung noted that “among the worst things that can happen to a top domestic intelligence officer is for him to be accused of sympathy for a far-right party”.

Despite the controversy, Maaßen has in fact landed on his feet. In a statement released late on Tuesday, the German government wrote: “The Office of the President of the Office for the Protection of the Constitution will be re-filled.

“In future Mr. Maaßen will become a state secretary in the Interior Ministry. Interior Minister Horst Seehofer has high regard for Mr. Maaßen's abilities on questions of domestic security, but he will not be responsible for the BfV within the ministry.”

There has already been some criticizm over the move by commentators who have questioned how Maaßen has been given this job despite the reservations over his behaviour.

However, it remains to be seen if Maaßen will continue to face intense scrutiny – and who will fill his shoes as top spy.

POLITICS
‘Winter of rage’: Experts warn of riots in Germany due to rising energy costs
Url copied to clipboard!