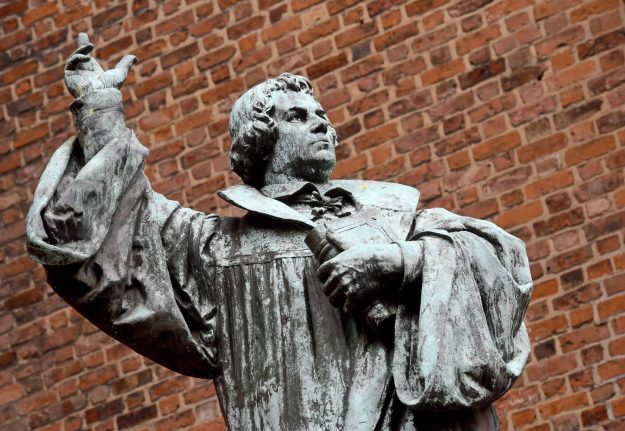 Martin Luther was born in 1483 in Eisleben and grew up in Mansfeld, in what is part of modern-day Saxony-Anhalt. Defying his father’s wish for him to become a lawyer, Luther entered St. Augustine’s monastery in Erfurt in 1505 following a near death experience in a thunderstorm. After he was nearly struck by a lightning bolt, he prayed to St. Anne, declaring that if he survived, he would become a monk. His commitment to his declaration is indicative of his unwavering character.

Luther was angered by rife corruption within the Catholic church. Particularly frustrating were indulgences: by paying towards the church, Catholics could supposedly reduce the amount of time they would spend in purgatory. It seemed ridiculous to Luther that individuals should have to pay for a closer connection to God, when God had given his only son because he loved the world so much. It is this conflict from which Luther’s 95 theses were born, as well as the two guiding principles of his theology.

Sola fide is the notion that faith alone suffices as the basis for salvation. Luther was not the first to promote this idea; St. Augustine had declared it almost a millennium previously.

Luther also advocated the idea of sola scriptura, which is the belief that only the Bible can tell us the truth. Why should the people have to pay for indulgences, when purgatory isn’t even mentioned in the Bible? Luther perceived the issue of indulgences as a clerical con against the masses, and hence the urgency of providing the laity with access to biblical scripture, so that they could discern the corruption in the church for themselves.

A language everyone could understand

This notion is one of the driving forces behind his translation of the Bible. In order to be able to understand the Bible’s message, you would need to be able to read it. But much of the German population was illiterate; moreover, barring a few prior translations which were written in local dialects and for clerical figures, there was no widely accessible translation of the Bible into German. It was only those who could read Latin – the clergy – who could access biblical scripture.

Thus, Luther set out to translate the Bible into a language comprehensible to the wider population. Yet he was faced with another challenge. As is still the case today, the German-speaking lands were divided by dialectal differences. There were two broad dialectal categories: Niederdeutsch of the northern German lands, and Oberdeutsch, of the mountainous southern German region. German speakers from Hamburg and Vienna would mostly not be able to understand each other.

How then could Luther write one translation which all could access? The key lies in his own history. Luther hailed from Saxony, roughly in the centre of the German-speaking lands. As a child, he had moved across the figurative linguistic borders, which meant he understood upper and lower German dialects almost fluently. He could therefore speak a German dialect which could be spoken all over Germany.

Another key to Luther’s success was the way in which he translated the Bible into a living, spoken German. Previous translations had had little popular appeal as they tended to be literally translated from the Latin. These translations were mostly aimed to facilitate preachers who could not understand Latin well, and so made little sense to the laity.

Conversely, Luther wrote in the language of the people. In his 1530 work Open Letter on Translation, he stipulated “You don’t ask Latin literature how to speak German, you ask the mother at home, the children in the street, the common man in the market.” Unlike previous word-for-word translations, Luther translated the meaning of the biblical passages, employing popular German phrases and sayings so that his text appealed to the everyday masses. Moreover, his chosen syntax and word order was devised for clarity when read aloud, so that illiterate Germans could also access the scripture.

The timing of Luther’s works is another significant factor in his success. Johannes Gutenberg had introduced the printing press to Europe some 70 years previously, so Luther was writing at a time of rising demand for German language publications. 500,000 copies of his bible were sold in his lifetime. Within a year of its publication, there had been 12 more authorized editions; each edition gave Luther the opportunity to refine and modify the language he used.

It is ironic that the Catholic church, who had deemed the German language as too coarse and confused for the word of God, was an instrumental tool in the spread of Luther’s ideas. The church quickly attempted to inhibit the spread of Luther’s ideas, but found they had to rely on his German to reach the same level of audience. Two Catholic translations of the Bible, for instance, were hurried out, both written in the language developed by Luther. It was thus that Luther’s language became the format through which the ensuing religious debates were carried out, and the language itself spread throughout the German-speaking lands.