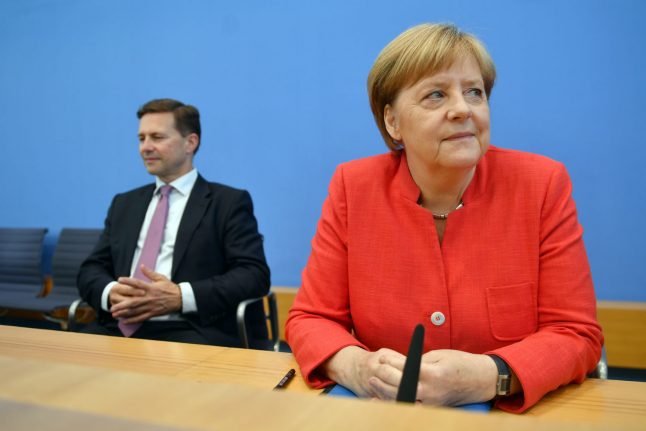 Merkel and spokesman Steffen Seibert at a weekly press conference in July. Photo>

Local police and prosecutors said the 22-year-old deceased had suffered  acute heart failure after coming to blows with the suspects on a playground in  the eastern town of Köthen late Saturday.

The far-right swiftly mobilized a demonstration on Sunday evening that drew  2,500 participants including 400 to 500 known extremists, authorities from the state of Saxony-Anhalt said.

The rally was billed as a mourning march, but groups of mostly white men were filmed chanting “national socialism, now, now now” – a reference to the Nazis' declared ideology – according to footage circulating on social media.

“At the end of the day in Köthen, a video shows open Nazi chants – that must affect us and outrage us,” said Steffen Seibert, Merkel's spokesman.

Saxony-Anhalt state's interior minister Holger Stahlknecht said several investigations have been launched over incitement to hatred over speeches given during the rally.

Investigators are also examining chants shouted during the demonstration.

The far-right party AfD has announced a new rally for Monday night, although it said in its call for assembly that political speeches would not be made.

In a video posted online by Buzzfeed, a man the website identified as a member of the far-right scene, David Köckert, was seen telling the crowd to loud applause that “we must defend ourselves in the race war against the German people, which is what happened here.”

“Do you want to continue to be bleating sheep or do you want to become  wolves and shred them to pieces?” asked the man to cheers.

Authorities have said the death of the man was “not directly” linked to the  injuries he suffered in the fight.

But fears were growing that the latest case could further inflame anti-migrant tensions, as it comes two weeks after the fatal stabbing of a 35-year-old man in the eastern city of Chemnitz that sparked xenophobic protests.

Two suspects – an Iraqi and a Syrian – have been arrested over the stabbing and a third man, also an Iraqi, is sought.

The Chemnitz protests have also led to a clash between Merkel and the head
of Germany's domestic intelligence agency, who raised doubts on a video
purportedly showing a “hunt on foreigners” by neo-Nazi mobs.

Merkel's spokesman and the chancellor herself have repeatedly used the
description in condemning the violent protests.

But spy chief Hans-Georg Maassen told the Bild daily that he had “no proof”
that the video circulating online, which appeared to show immigrants being
accosted and chased, was authentic.

Maassen, under pressure to show proof to back his claim, has submitted to
the government a report, which is being “examined”, said both Seibert and the
interior ministry.