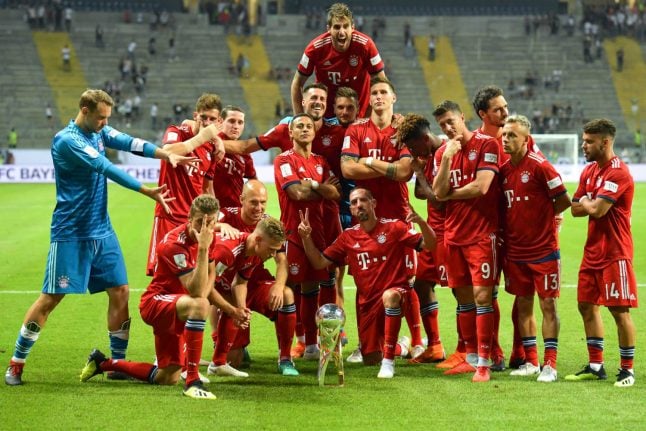 Boring, boring Bundesliga. That has been the tenor in German football over the last few years, as bully boys Bayern Munich have rampaged from league title to league title.

The 28-time German champions have won the Bundesliga in each of the last six seasons, often by a depressingly large points margin. Bayern's grip on the Bundesliga trophy (or 'salad bowl') has been suffocating in recent years. Photo: DPA

Bayern’s financial muscle and relentless winning mentality make them the unassailable force at the top of the German game. But could this be the year they finally slip up again?

With a squad in transition and a new coach, Niko Kovac, who is relatively unproven at the  highest level, there is a tiny chance that Bayern could struggle this year.

Kovac may have led underdogs Eintracht Frankfurt to a fairytale triumph in the cup last season, but some will still question whether he has the authority to manage a dressing room full of superstar egos, from Arjen Robben to Thomas Müller via Jerome Boateng and Thiago Alcantara. Will the champions slip up under new coach Niko Kovac? Photo: DPA

Last autumn, Bayern had to haul former coach Jupp Heynckes out of retirement to stave off a growing crisis, but there will be no Plan B this year if things go pear-shaped under Kovac.

Performances in pre-season have been mixed. Imperious in the German Supercup two weeks ago, Bayern were left red-faced last weekend as they struggled to beat fourth division Drochtersen/Assel in the cup.

So if Bayern slip up, who will step up? Here’s our introduction to the main challengers, to help you hold your own in any title race discussions down your local Kneipe. The last team to beat Bayern to the title was Borussia Dortmund, who were crowned champions of Germany in 2011 and 2012.

After a chaotic last few years, the cult club from the heart of Germany’s industrial Ruhr region are hoping to relive old glory under new coach Lucien Favre.

With their iconic black and yellow jerseys, famous “Yellow Wall”, and carefully crafted image as a likeable alternative to Bayern, Dortmund have established themselves as a favourite among international fans in recent years, and they have plenty of anglo-saxon appeal in attack with England’s Jadon Sancho and the USA’s Christian Pulisic.

Clever thing to say about them down the pub: “I don’t care what you say about sentimentality, Marcel Schmelzer just isn’t the player he once was.” Can Schalke rise above rivals Dortmund again, as Naldo did in the derby last year? Photo: DPA

A grand old icon of German club football, Schalke have famously not been crowned champions since 1958, though they came agonisingly close in 2001.

With key players such as Leon Goretzka and Max Meyer having left in the summer, it seems a long shot that the club from Gelsenkirchen can break their title curse this year. Yet a promising future does beckon under Tedesco.

Clever thing to say about them down the pub: “It's time for Tedesco to do more than just win ugly” “You go on your knees behind Bayern, and I'll push 'em over”: Julian Nagelsmann (left) offers advice to Steven Zuber. Photo: DPA

Bayern’s opponents on Friday, lowly Hoffenheim have not just exceeded expectations in recent years, they have blown them apart.

When Julian Nagelsmann took over as head coach at the age of just 29 two years ago, the club looked destined for relegation, but now they are playing in Europe, and Nagelsmann is an international star.

The youngest coach in Bundesliga history, Nagelsmann turned down Real Madrid this summer, agreeing instead to join RB Leipzig at the end of the season. In his last year at Hoffenheim, he says, he wants to win the title.

Chances of beating Bayern: Lower than Nagelsmann would have you believe

Clever thing to say about them down the pub: “They were always going to struggle playing in three different competitions” Celebrating at the end of the season? RB Leipzig challenged for the title two years ago. Photo: DPA

Promoted to the top flight two years ago, their rapid rise saw them challenge for the title immediately, but they have hit rocky ground since.

An ignominious divorce from successful coach Ralph Hasenhüttl caused grumblings in the summer, and they have lost key midfielder Naby Keita to Liverpool.

Clever thing to say about them down the pub: “Diego Demme was always more consistent than Keita anyway” Another team whose badge incorporates the logo of a multinational company, Leverkusen are our picks to be this season’s dark horses.

After an up-and-down but ultimately acceptable first year under Heiko Herrlich, Leverkusen have been quietly building one of the most promising squads in the league.

The youthful flair and pace of Julian Brandt and Leon Bailey in attack is complemented nicely by the reliable experience of the Bender twins (yes, really) in midfield. Add to that good signings such as goalkeeper Lukas Hradecky, and you have a recipe for success.

On the other hand, Leverkusen are nicknamed “Neverkusen” in English, due to their chronic ability to narrowly miss out on titles. So don’t bet your house on it.

Chances of beating Bayern: Higher than Herrlich would have you believe

Clever thing to say about them down the pub: “Bailey and Brandt will be gone by next summer”

So where can you watch it?

As avid readers will know, The Local doesn’t provide extensive sports coverage, though we will keep you abreast of key developments at the business end of the season.

For those who want more regular, English language coverage of German football, we can recommend sites such as Deutsche Welle and Bundesliga.com.

There are also a number of good English language podcasts on German football, most notably Talking Fussball.