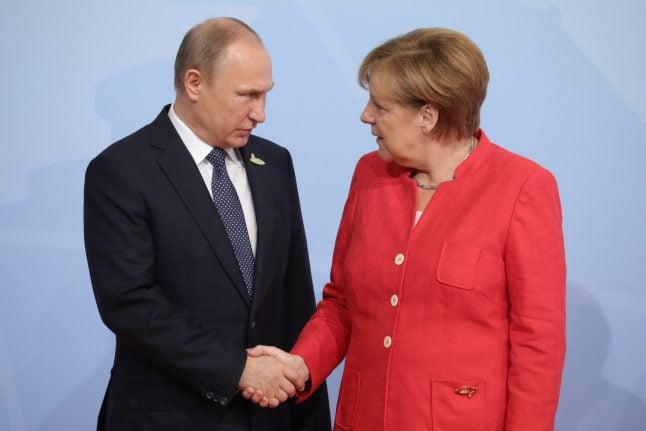 The heads of state are expected to discuss the Ukranian conflict, a gas pipeline, and the war in Syria. Photo DPA

Merkel will hold talks with the Russian President Vladimir Putin at the Chancellor’s official retreat Schloss Meseberg near Berlin on Saturday from 4pm.

Experts on German-Russian relations believe the heads of states are meeting to keep the bilateral agenda alive in a tense international climate.

Merkel and Putin are excepted to discuss hot international topics, including: a joint pipeline for natural gas, the war in Syria and conflict in Eastern Ukraine, according to Merkel’s spokesman Steffen Seibert.

Why is it happening?

The planned meeting, which came as a surprise to many, illustrates how the remarkable Helsinki talks between Trump and Putin in July, and the storm of criticism they unleashed, has put pressure on Western powers to reassert their position on Russia, while the Trump administration strides forth with its own, unpredictable foreign policy.

Merkel told AFP that she anticipates “tough talks” with Putin, but that she values maintaining “permanent dialogue” with Russia during times of political turmoil.

The two heads of state last met in May at Putin’s residence in the Black Sea town of Sochi.

“I think we are entering a new stage in German-Russian relations because of the changing international environment [and] the reaction to the U.S. policy,” Stefan Meister, a Russia expert at the German Council on Foreign Relations, told The Local.

What are the big topics?

The Nord Stream II pipeline project through the Baltic Sea would increase the amount of natural gas Russia can send directly to Germany and the rest of central Europe, while bypassing and economically harming countries further east.

“Russia views the new pipeline as a central part of its strategy to reduce its dependence on Ukraine for bringing its gas to Europe,” John Lough, a Russian specialist at the British think tank Chatham House, told The Local.

Until recently, the project for energy cooperation has also enjoyed widespread political support in Berlin.

But the stakes for this pipeline have since raised following sharp criticism from several Eastern European countries and verbal backlash from the United States. At last month’s NATO summit in Brussels, Trump said Germany’s dependence on Russian energy makes it a “captive of Russia.”

Consequently, some experts predict that Putin and Merkel will seek a compromise to ensure that a portion of Russian gas keeps flowing through Ukraine.

What about current conflicts?

In eastern Ukraine, where Moscow has backed pro-Russian rebels, Germany wants to resolve the conflict in the region after it was dissatisfied with the implementation of the peace deal, the Minsk agreement.

Berlin continues to uphold its sanctions against Russia in response to its annexation of Crimea by Russia in 2014.

Tensions between the countries have especially heightened over the Syrian war. Germany partially blamed Russia for a suspected chemical weapons attack killing dozens and thought to be staged by forces loyal to Syrian President Bashar al-Assad.

Russia’s Foreign Minister Sergey Lavrov travelled to Berlin in July to meet with Merkel to discuss the situation in Syria, and a summit on the Syria conflict that could include Turkey and France’s leaders looks to be on the horizon.

Some analysts think there will be little room to maneuver, though, when it comes to strategizing on Syria and Ukraine.

Their views on the conflicts flaring in those countries are “unbridgeable,” according to Lough. A Syrian soldier standing at a checkpoint while a Russian military vehicle drives past bearing the Russian flag. Photo: DPA

How does Trump fit into the talks?

Beyond these common points of interest, analysts suspect that the leaders will discuss an appropriate response to Trump’s tariffs on aluminum and steel imports and economic sanctions on Russia.

“Trump’s sanctions on Russia have an impact on German business,” said Meister. “So, both [countries] are somehow weakened somehow with this U.S. policy, but this makes them more flexible with regard to their relationship.

“They both want something from the other side, and they both need to show to the U.S. President that they are willing to resist his pressure.”

The U.S’s punitive tariff measures against Turkey are also expected to have a knock-on effect on Germany and Russia. Trump and Putin in Helsinki, where the U.S. President questioned his own intelligence agency's findings about Russian election meddling. Photo: DPA

Will Merkel take a tough stance?

Political analysts are waiting to see whether Merkel takes an assertive stance in the talks. Many believe she is the best-positioned leader to mediate talks between Russia and the West as Putin’s closest negotiating partner in Europe.

“Merkel is the only European leader at present who has the experience and capability to have a serious conversation with Putin,” Lough said. “She reads him better than another other leader and he knows this.”

It also helps that the leaders can communicate without translators. Merkel, who grew up in the former East Germany, speaks fluent Russia, while Putin, a KGB agent stationed in Dresden, is fluent in German.