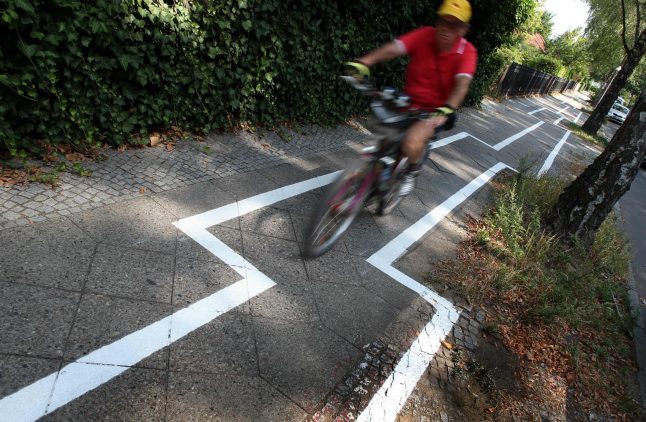 Only the most skilled cyclists will be able to navigate this zig zag lane. Photo: DPA

The new white lines were painted onto the pavement on Tuesday with local residents and passing cyclists reacting in both disbelief and amusement. Passersby called the new path “hair-brained” and “a hazard,” as well as “funny” and “cool,” the Berliner Morgenpost reports.

Social media users are rubbing their eyes and speculating whether the photos are fake. Take a look at this video or head over to Leo-Baeck-Straße for proof.

Responsibility has fallen on the Council for Environment and Civil Engineering in the district Steglitz-Zehlendorf to explain its motives, but it seems that the firm it commissioned to design the path went rogue.

Earlier this summer, parents at the Schweizerhof elementary school had requested the demarcation to orient children riding their bikes to school, so that they stay safe on the pavement without obstructing pedestrians, but they weren’t expecting this slalom-style lane.

Since the commissioned firm acted without consulting the council on its outlandish design, city councillor Maren Schellenberg told the Berliner Morgenpost that the zigzag marks “will not stay” and will be removed by the end of the summer.