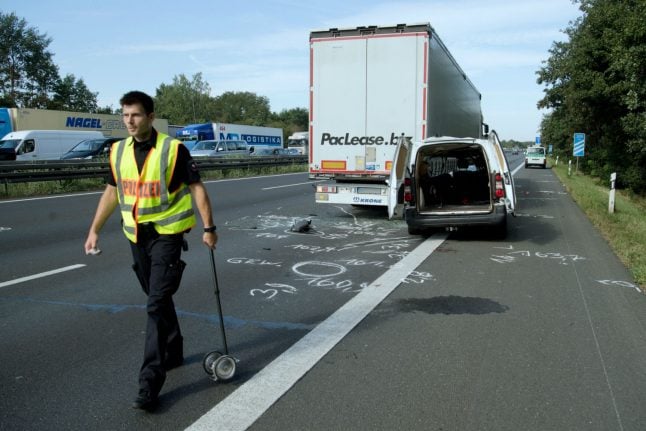 An accident on the A2 motorway in July. Photo: DPA

The A2 autobahn outside Hanover is a notoriously dangerous stretch of road, the Hannoversche Zeitung (HZ) reports. An average of five accidents take place there every day. In 2014, ten people lost their lives on the busy road.

This is clearly no laughing matter. But a bizarre incident from early August has turned the Lower Saxony state road authority into a laughing stock.

In early August, the road authority agreed to work with a self-described “elf commissioner” who claimed that the high number of accidents were being caused by trolls, elves and other magical creatures.

Elf commissioner Melanie Rüter speculated that the mythical beings were upset at the fact that the motorway was disturbing their daily routines. Along with Marion Lindhof a communicator who specializes in talking with animals, she set off with an official escort to visit five points along the autobahn which were known for the high number of accidents which occurred there.

The two women immediately detected “very sad energies,” according to the HZ.

“In some cases it was incensed creatures which were rebelling and wanted their piece of nature back,” they explained later.

By the day’s end though, they were able to report some success. “Certain parts of the motorway have now been energetically sealed,” they said.

Friedhelm Fischer, the head of the state road authority explained that “we are an open-minded authority that supports all our citizens and supports many activities.”

Fischer was keen to point out that the elf outreach project had not incurred additional costs, as it been conducted during a routine check of the perimeter fences.

“If the women believe that their powers can make a difference, we support that,” he said.

The Lower Saxony transport ministry though, was less than impressed with Fischer's open-mindedness.

“We do not consider spirituality to be an appropriate method for improving traffic safety,” the ministry told broadcaster NDR. If it had been duly informed that the project would have been “immediately prohibited.”

NDR reports that there have been no further accidents at at least one of the five vulnerable points visited by Rüter and Lindhof. But a collision nearby between two trucks on Monday led to one driver sustaining life-threatening injuries.