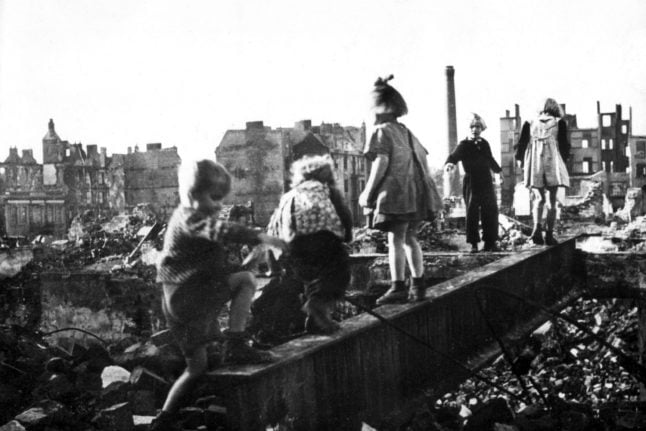 Children standing in the ruins over Hamburg. Photo:DPA

From July 24th to August 3rd, 1943 the allied forces executed ‘Operation Gomorrah’ which left a large part of the city of Hamburg in total ruin. A city of debris and ash woke up to mourn those who'd lost their lives in the attacks. The death count reached 35,000 and a further 125,000 people were injured. Deep scars remain to this day.

The howling cry of sirens echoed throughout the night of the July 27th, 1943. In the basement of their house in Hamburg-Hammerbrook, 14-year-old Günter Lucks and his brother Hermann had sought shelter from the bombs of the British Royal Air Force. Consumed by fear, they stared towards the shuddering ceiling above them.

Children were crying, one woman desperately screamed for help. And then, a phosphorus bomb hit the house. The two brothers rushed upstairs and tried, in vain, to battle against the flames. Hermann insisted on going to look for their aunt who lived nearby.

“Stay here,” begged Günter, but his brother wouldn’t listen. “My brother ran away and then suddenly there was a surge of fire which he disappeared into,” remembers the now 89-year-old. Hermann died – just a few days before his 16th birthday.

Although it’s been 75 years since the worst air attack on the habourside town, Günter still remembers everything in detail. “It was a night of hell,” he utters, while clasping a black and white photograph of his brother in his hands.

Günter Lucks holding a picture of his brother, who died during the Hamburg firestorm. Photo:DPA

The Hamburg firestorm was a part of “Operation Gomorrha” – the code-word used by the Allies for the bomb attacks on the Hanseatic League town from July 24th to August 3rd, 1943. The main aim was, from the words of the then British Prime Minister Winston Churchill himself, to break the morale of the Germans and to speed up the end of Hitler’s Germany.

“Gomorrha” was a reference to the biblical story of the cities of Sodom and Gomorrah, which were completely consumed by fire and brimstone by the divine judgement of God. A nod towards the plan of annihilating a large part of the city of Hamburg.

“By death count alone it was the most fatal attack of the war on a German city,” the historian Malte Thießen told DPA. A total of 35,000 people lost their lives and a further 125,000 sustained injuries. Half of all residences were destroyed, predominantly in the eastern city districts. “No event in Hamburg’s history holds such reverence for the public today than the firestorm,” said the professor.

The city of Hamburg in ruins. Photo:DPA

But how did the bombing lead to an unrelenting and vicious firestorm? “It was a very hot week, the city was dried out – that was fatal factor due to the fire bombs used,” explains Thießen. The sparks from the bombs latched on to large fire units and absorbed the oxygen. The result: hurricane-like storms raced through the city. Trees were uprooted, roofs of houses were torn apart. The flames even sucked unfortunate bystanders into their midst. Many others suffocated in the basement shelters.

During the night of the firestorm the house of the Kuckhoff family was also set ablaze. The despairing mother wanted to go back in to save her sewing machine – mission impossible. A lorry stopped, a soldier got out and asked the stranded residents to quickly get it.

The heat was violent and unforgiving; on the drive past streets of burning houses, the then 5-year-old Nestor Kuckhoff witnessed horrifying sights; on the streets lay people, writhing around on the floor trapped in the fire, crying out for help.” The now 80-year-old priest continued: “No-one could help them because there was no water.”

The next day many Hamburgers wandered through the devastated city – among them numerous children, who had been separated from their parents. “Primarily in the east, people just couldn’t find their houses anymore because the streets had been destroyed, and they couldn’t orient themselves because everything was flat,” said Thießen.

In St. Michael’s Church in Hamburg, a special commemorative exhibition for the 75th anniversary of the air attacks is taking place. Photos of the firestorm and the city in ruins are on display and some harrowing images of the aftermath of the bombing can be seen. Visitors can also see how the National Socialist government deployed prisoners from the nearby Neuengamme concentration camp to clean up the rubble.

Hamburg mayor Peter Tschentscher at a vigil to commemorative the Hamburg firestorm. Photo:DPA

This exhibition acts as a reminder of the past and a warning to “stand up for democracy, human rights and our liberal democratic foundations,” Hamburg's Social Democratic (SPD) mayor Peter Tschentscher announced to several hundred onlookers at a vigil last week.

“Operation Gomorrha” left behind deep scars. “The bombing attack radically changed the outer appearance of the city,” historian Dirk Brietzke told DPA. “But equally the air attacks had long-lasting effects on those who experienced the horror, and partly traumatized them.”

The morning after the firestorm Günter Lucks also stumbled through the ruins, turning over corpses in search for his brother. “Many had shrivelled to the the size of a child”, he remembers. He’s learnt with the years to how to deal with what happened, said Lucks. “Time heals even the deepest of wounds.”