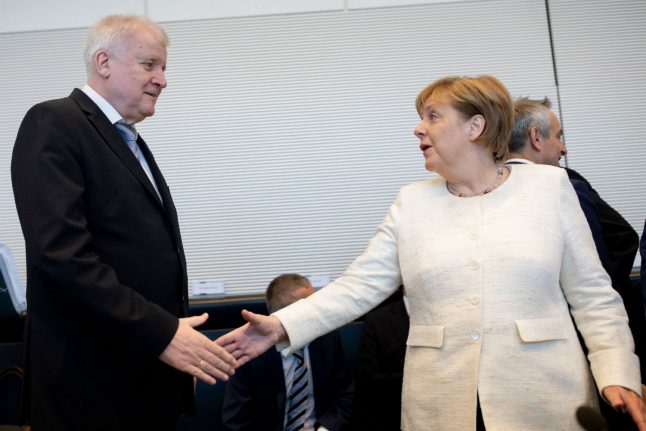 In high-stakes crisis talks overnight, Merkel had put to rest for now a dangerous row with her hardline Interior Minister Horst Seehofer that had threatened the survival of her fragile coalition government.

In separate statements, Merkel praised the “very good compromise” that she said spelt a European solution, while Seehofer withdrew a resignation threat and gloated that “it's worth fighting for your convictions”.

In a pact both sides hailed as a victory, Merkel and Seehofer agreed to tighten border controls and set up closed holding centres to allow the speedy processing of asylum seekers and the repatriations of those who are rejected.

They would either be sent back to EU countries that previously registered them or, in case arrival countries reject this — likely including frontline state Italy — be sent back to Austria, pending an agreement with Vienna.

CSU general secretary called the hardening policy proposal the last building block “in a turn-around on asylum policy” after a mass influx brought over one million migrants and refugees.

But criticism and doubts were voiced quickly by other parties and groups, suggesting Merkel may only have won a temporary respite.

Refugee support group Pro Asyl slammed what it labelled “detention centres in no-man's land” and charged that German power politics were being played out “on the backs of those in need of protection”.

Bernd Riexinger of the opposition far-left Die Linke party spoke of “mass internment camps” as proof that “humanity got lost along the way” and urged Merkel's other coalition ally, the Social Democrats (SPD), to reject the plan.

SPD leader Andrea Nahles voiced cautious support but said her party needed to discuss “many questions” on the plan with its experts before holding a joint party meeting with the CDU/CSU bloc at 1600 GMT Tuesday.

One of the SPD's migration experts, Aziz Bozkurt, was withering, charging that the proposed holding centres would be “impractical and fully on track with the AfD” – the far-right party that has railed most loudly against immigrants.

The deal announced overnight ended Merkel's worst crisis for now after she faced down an unprecedented mutiny by Seehofer, head of her party's traditional Bavarian allies the CSU.

A failure to defuse the open conflict would have threatened an end to their 70-year party alliance, a scenario which would have forced Merkel to find new partners or call fresh elections.

Top-circulation Bild daily – which had called the weeks-long battle “Merkel's endgame” after 12 years in power – gave a lukewarm welcome to the face-saving agreement.

“The CDU and CSU have now struck a deal they could have reached three years ago,” it said, referring to the peak of the mass migrant influx in mid-2015.

“It's possible that this solution will work,” Bild said in its commentary.

“But it's certain that the mood in a coalition has never been as toxic as in this one.”

The opposition pro-business Free Democrats (FDP) said they supported steps against such migration within the EU but also took a snipe, saying the deal's effectiveness remained “completely open”.

The main problem was that it relies on pacts with other EU states that “remain to be agreed at a future stage,” said FDP parliamentary chief Marco Buschmann.

A question mark hovered over Merkel's hopes that Austria will willingly take back some of the rejected asylum seekers.

Austria's former defence minister Hans Peter Doskozil told Bild that he expected the government to reject an agreement that was “bad for the EU and bad for Austria”.

Austria's Vice Chancellor Heinz-Christian Strache of the far-right Freedom Party warned last week that on the day Germany sends back migrants “we will be ready and secure our own borders”.