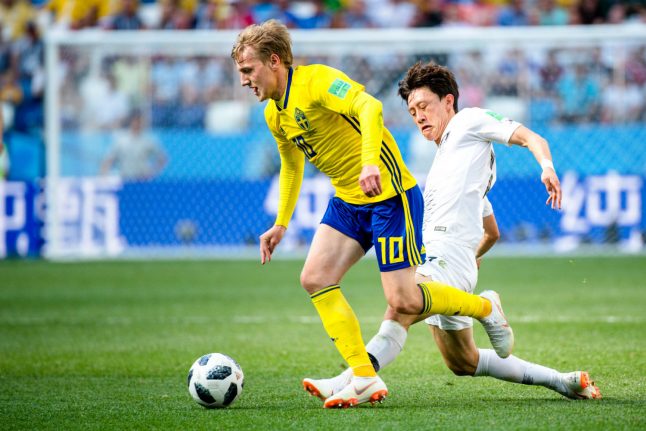 Still, at least they know exactly where the danger is coming from.

The main creative threat in Janne Andersson's principally solid, unspectacular side lies in the shape of Emil Forsberg, one of the most talented wide attackers in Europe.

“I'm a big fan of Emil Forsberg, he's a great player,” said Germany defender Mats Hummels on Thursday when asked if anyone in the Scandinavians' side could make it into the World Cup holders' line-up.

Bayern Munich defender Hummels and his international teammates are well placed to comment on Forsberg's ability.

The 26-year-old has come to Russia on the back of two outstanding seasons in the Bundesliga with RB Leipzig, and on Saturday evening, at the Fisht Stadium by the Black Sea, he will come up against a German side featuring his club colleague Timo Werner.

Forsberg had the highest number of assists of any player across the top European leagues in the 2016/17 season and has been linked with some of the top clubs in Europe this summer, including Champions League runner up Liverpool.

The Germans came early to Sochi to acclimatise to the heat as they look to stave off talk of a crisis following their 1-0 defeat to Mexico, with which they began their trophy defence.

In contrast, the Swedes — who stunned Italy in a play-off to qualify — travel down the coast from their peaceful base in the resort of Gelendzhik in rather more buoyant mood after beating South Korea 1-0.

If Mexico beat the Koreans earlier on Saturday, a draw for Sweden against the Germans would probably condemn Joachim Loew's side to an early exit in Group F – Sweden could then play against the Mexicans in their final game knowing a point would take them both through.

The Germans have work to do after a disjointed opening performance.

Worryingly, they were especially exposed at full-back, with Joshua Kimmich posted missing time and again on the right. Mexico's goal came from their left-winger Hirving Lozano.

Forsberg, who has been linked with a big-money move to the Premier League, did not stand out against South Korea as Sweden won thanks to an Andreas Granqvist penalty.

So he may feel he has something to prove against Germany.

“We don't play as Mexico play, we are not the same type of players,” was captain Granqvist's assessment of the game. He said the team needed to stay solid, as they did in qualifying matches, especially against Italy and France.

“We need to be very compact when we win the ball, have our own offensive game, create some chances, and keep the ball as much as possible.”

Forsberg has replaced the now retired Zlatan Ibrahimovic as the biggest star in the Swedish side, even if he lacks the dominant personality of Zlatan.

With Forsberg joined in the Swedish set-up by Werder Bremen full-back Ludwig Augustinsson and Hamburg midfielder Albin Ekdal, as well as former Hamburg striker Marcus Berg, there are plenty of familiar faces for the

Germans. But that familiarity works both ways.

“Emil reads a lot about football on the net and knows good German, so I've been getting him to help in our preparation of the game,” team scout Roger Sandberg told Swedish newspaper Aftonbladet.

Forsberg came through just ahead of the young Swedish generation that won the under-21 European Championship in 2015.

For Germany, a core remains from the last meetings between these teams, memorable contests in the qualifiers for the last World Cup: Germany won 5-3 in Stockholm after throwing away a four-goal lead to draw 4-4 in Berlin.

So will their extra experience make the difference in Sochi?

“Maybe it's a good thing for us, but it's not a guarantee, it's not anything we can rely on,” insisted Hummels.