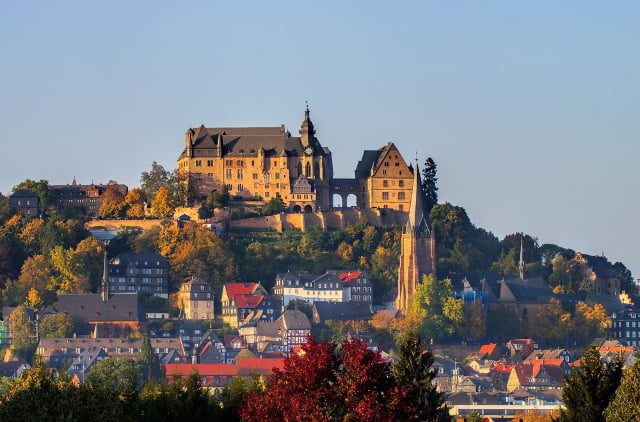 Almost quarter of a century has elapsed since I lived for a year in a poky room in Studentendorf. But stick a loaf of German rye bread under my nose and I’m straight back there, on the daily trek downtown from the heights of Geschwister-Scholl-Strasse, the bend on Biegenstrasse, the brutal climb up Pasternakstrasse after a day on the Licher.

I’ve lived in many places since, but don’t ask me to name their streets. I could pass an A-Z test in Marburg tomorrow and drive a taxi past the half-timbered houses and over the cobbled hills.

It’s 1994. I’ve scarcely arrived when Helmut Kohl rolls into town. The Chancellor addresses the large crowd on the Rathaus square and is met with cacophonous jeering. A wall of riot police train their cameras on the anarchists and communists, who scream “liar” repeatedly, drowning him out. I click my heels. I’m not in Limerick any more.

This is the first year of my university’s exchange programme with the almost 500-year-old Philipps University. A spirit of experimentation prevails. I had begun learning German the previous year and really only understand Bahnhof, as the phrase goes.

For the first months I’m mute. My new friends all speak much better German than me. Not hard, of course, but they are ambitious and operate on a different linguistic plane. It’s intimidating. A Greek girl laughs at my ineptitude. Not unkindly, but still.

Things get excessive quickly. Food is a hideous chore. All money is beer money. Or it might stretch to the local Äppelwoi, the pride of Hesse. I’m not an ideal neighbour and I live in fear of angry notes in the shared kitchen. I occasionally wake up with cheese sandwiches stuck to me after stealing the ingredients from the fridge.

(I’m 43 now and haven’t slept on a sandwich for more than 20 years so you can stop judging me).

Spring comes, the snow thaws, and the words pour out. No-one is more surprised than me. I meet the Greek girl again and rant on about something at length. She’s dumbfounded. Where did I find my tongue? I shrug and point at my beer bottle.

In disintegrating clothes I wander the streets of the Oberstadt. A medieval dreamscape, a wedding cake of a town, with a perfect Schloss on top. I’m trying to cultivate a disaffected image (please don’t ask me why, I can’t remember) but the fact is this place makes me swoon in shamefully bourgeois ways. I’m head over heels. And it’s only partly the fault of the Licher.

Thursday night means Café Trauma. A disco for misfits. These are the days of Tocotronic, Die Sterne, and Blumfeld. But the Neue Deutsche Welle lingers on too. Fred vom Jupiter gets played every single week. Spliffs abound, dressing down is mandatory. I love every minute of it. I don’t remember a thing.

New Year’s Eve. Up at the Schloss with my friends. Fireworks like I’ve never seen drip over the edges of the forested bowl in which Marburg sits. The soles of my shoes have come loose and smile broadly. I’m not getting new ones. All money is beer money. A young Californian berates us, says my friends and me are united only in booze, not real friends. (He’s wrong, as it happens, we’re all still in touch.)

Late-night parties by the Lahn river as summer comes round. We fall in with a group of young Germans encased in the late 1970s. They talk nuclear disarmament, go skinny dipping and listen to the Specials in their basement flat. They’re southern waifs lured north by Marburg’s reputation as a haven for leftist ideas. And it is. But the right-wing fraternities are here too and flare-ups never seem too far away. Down by the Lahn. Photo: O. Rohulya/Depositphotos

Yet another corridor party in Studentendorf. I’m wasted. Struggle to find my room number. Find it. Fall into bed. The Californian is there. What the hell is he doing in my bed? Oh. It’s his bed. I’m in the wrong building. He doesn’t hold it against me.

At a bar called Delirium I have my first brush with firearms and teargas. A tanked-up American soldier boy hurls a chair at some Germans who teased him. They make to strike back and he pulls a gun. A barmaid whips a canister from nowhere and the air turns woozy. The bar empties. Out on the street, eye-clutching customers upbraid the bartender for over-reacting. I think she got it right.

The term ends and my time’s up but I can’t leave. I look for work. Struggle to find any. Teach some English. Anything. Anything. Anything. I’ve tasted continental Europe. I speak a European language. Life is many-paced. The kebabs are to die for. I read chess books to a blind man, who beats me every time. Bread is science here. I can’t go back.

I do go back. It’s a disaster. I crumple. I drop out of university. Wend my way back to Marburg for another year. Eventually go back to Ireland, eventually finish my degree. But the damage is done. I have to live abroad. Marburg made me.

Paul O'Mahony now lives in Stockholm and is The Local's managing editor. He would love it if you signed up to become a Member if you haven't already.