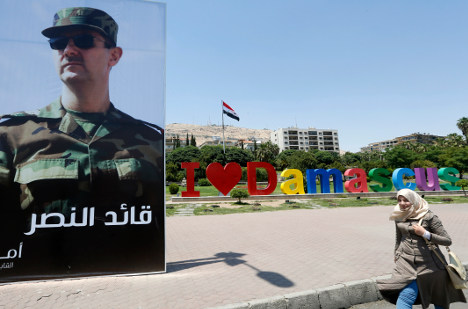 The magazine described the warrant for Hassan's arrest as “the most serious effort yet by a Western country” to hold Assad's regime accountable for crimes committed against Syrians since a 2011 uprising sparked a brutal civil war.

Clemence Bectarte, lawyer and coordinator for the FIDH Worldwide Movement for Human Rights, said it was “the first time in the world that an independent judiciary has determined individual responsibility for the large-scale crimes perpetrated” by Damascus.

The German federal prosecutor's office declined to comment when contacted by AFP.

Spiegel said prosecutors are alleging that 64-year-old Hassan authorised his officers to “beat, rape, torture and kill” hundreds of prisoners in Syrian government detention facilities between 2011 and 2013.

The charges against Hassan are reportedly based in part on witness reports and photographic evidence smuggled out of the country by a photographer who worked for the Syrian military police.

Known as “Caesar”, the photographer fled his homeland in 2013 carrying 55,000 photographs showing the bodies of people who had been tortured. Although the alleged abuses did not happen in Germany, the case has been filed under the legal principle of universal jurisdiction, meaning that any country can pursue perpetrators regardless of where the crime was committed.

Germany is one of the few countries in the world to apply the universal jurisdiction principle.

The European Center for Constitutional and Human Rights (ECCHR), a Berlin-based rights group, said the warrant for Hassan's arrest came after it filed a criminal complaint last year against 10 high-ranking Syrian officials accusing them of crimes against humanity and war crimes.

The ECCHR, which filed its complaint jointly with a group of Syrian torture survivors and activists, hailed the prosecutors' move as “great news”.

On its Twitter feed, it quoted torture survivor Munem Hilaneh as saying:

“The silence of the world during 7 years of ongoing crimes in Syria made me doubt if justice still exists. What happened today gives hope to me and to thousands of Syrians”.

“We demand his arrest in the name of every person whose tortured image burns in our minds,” it tweeted.

More than 350,000 people have been killed in the Syrian seven-year war, which started with the brutal repression of anti-government protests.