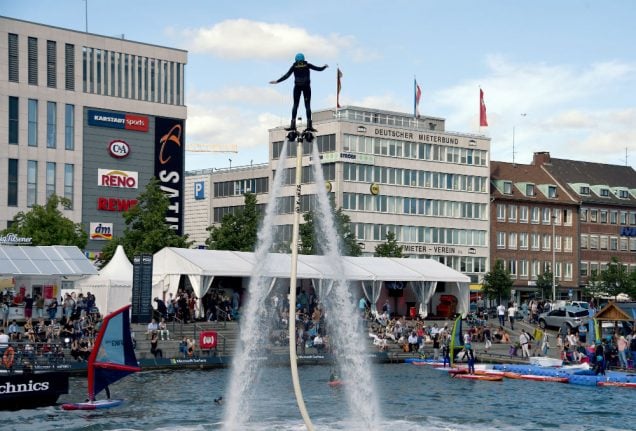 A visitor trying out a flyboard at Kiel Week last year. Photo: DPA Held every year in the baroque city where Johannes Sebastian Bach spent much of his life, this classical festival is formed through a series of concerts held at venues including the famous Nikolaikirche, where the musical mastermind spent the majority of his time composing, conducting and making music.

The festival, which has both free and paid events, also includes guided tours of the Bach Museum and open-air choruses conducted in the scenic backdrop of Leipzig's Altstadt.

SEE ALSO: How hearing Bach at Easter gave me a deeper appreciation for learning German The duke and dutchess of Schwerin greet guests at the entrance of the Schlossfest in 2009. Photo: DPA

Germany has no shortage of castles, but one of its most beautiful is often overlooked by visitors to the country.

Dubbed the “Neuschwanstein of the North,” the fairy-tale Schwerin Palace in the sparsely populated state of Mecklenburg-Western Pomerania sits on an island surrounded by an iridescent lake.

This annual festival pays homage to the castle's nearly 150-year-old history with costumes, an arts and crafts fair and many festivities including historical dance lessons. Every year the idyllic village of Assmannshausen on the Rhine River hosts a festival for its famed, local red wine which resembles a red burgundy.

In additional to several tasting booths, the family-friendly festival hosts live music, dancing and even cooking classes for kids.

Located not far from Darmstadt, the tiny town also participates later in the summer in “Rhine in Flames” – a festive fireworks display which lights the sky with colour. Not only is Kiel Week the largest sailing event in the world, with over 2,000 types of boats, ships and sailboards taking part, it's also a sprawling open air festival that annually attracts some three million visitors from Germany and abroad.

What started out as a sailing festival in the state of Schleswig-Holstein’s picturesque capital is now a giant Volksfest, replete with several stages of live music, stand-up comedy and an international food festival.

SEE ALSO: How to understand the North Germans After winning the World Cup in 2014, Germany is proudly back in action.

Fans can gather at the coincidentally titled Straße des 17. Juni stretching from Brandenburg Gate to the Querallee to watch Germany’s first game – versus Mexico – on six giant screens on June 17th.

If all goes well, you'll be hearing the word Tor! (Goal!) at least once. If you miss this kick-off event, be sure to catch the other German games in June on the 23rd (versus Sweden) and the 27th (versus South Korea). A musician getting reading to perform at the Fête in 2014. Photo: DPA

From rooftops to street corners across various neighbourhoods in Berlin, the city comes alive with the sound of music to mark the first day of summer on Thursday, June 21st.

No Fête in the capital would be complete without its core celebration in Mauerpark. Here jam sessions will take place against a graffiti-sprayed backdrop. After-parties stretching into the wee hours of the morning make it a distinctly Berlin festival. One of the art exhibits held at a former factory at ExtraSchicht in 2017. Photo: DPA

For a unique glance into the spirit of the Ruhr Region, this event (called ExtraSchicht in German), spotlights local culture in former industrial hubs, many abandoned at the end of the coal and steel era.

A piano concert at the industrial museum Henrichshütte Hattingen, a poetry slam in a tech museum and an artist collective performance at Nordsternpark (a former coal mine in Gelsenkirchen) are just a few of the event's offerings.

Shuttle buses will be available to take participants to 100 locations in 22 cities throughout the region as part of this eclectic festival – which has been taking place since 2001. Artists speaking with visitors at a previous FlotART. Photo: FlotART

If you live in or around Hanover, Braunschweig or Celle, as well as take an interest in creativity, this festival may just float your boat.

In the municipality of Flotwedel, stables, barns and courtyards will become “art spaces” in which artists will work and exhibit some of their pieces.

During the second weekend in June, up to 250 artists in dozens of varying locations can be observed in their element. But don’t be shy if you’re eager to participate as everyone from established painters to hobbyists are invited to join.

A colourful programme will also be offer, including concerts, a poetry slam, readings, theatre performances and much more.