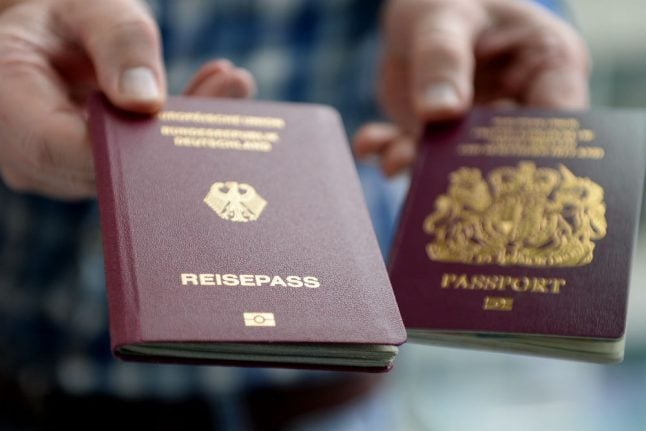 A man holding a German and a British passport in Berlin. Photo: DPA

The fact that Brexit is on the horizon accounts for this record number and 162 percent increase, Destatis writes. The UK plans to officially withdraw from the European Union at the end of March next year.

Some 9 percent of British nationals who acquired German citizenship through naturalization last year were from abroad and don’t currently live in Germany, Destatis reports. This was the highest proportion among people from all other EU countries obtaining German citizenship.

These are mainly people and their descendants who expatriated during the Nazi period, Destatis adds. UK citizens who got German citizenship last year were on average 52.8 years old – significantly older than the average age of nationals from other EU countries (40.9 years).

Foreigners who have lived in Germany for eight years or longer and who have a residence permit can generally acquire German citizenship through the process of naturalization under certain conditions.

Figures from the press release reflect the increasing number of Brits who are calling Germany home. In Berlin last year, for instance, some 26,840 UK nationals were recorded as living in the capital – a dramatic increase from 12,355 the previous year.