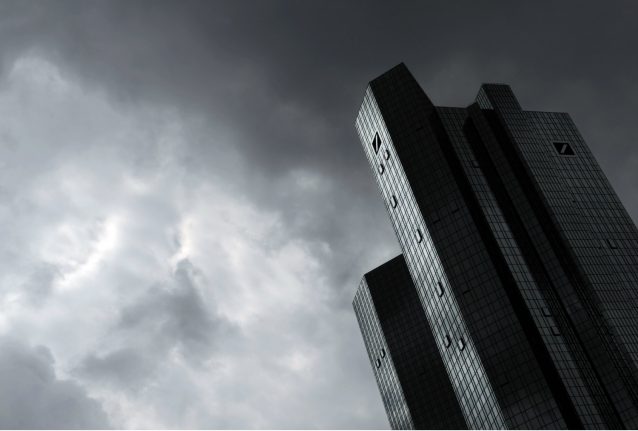 Citing “people familiar with internal bank discussions,” the Wall Street Journal reported that around one in ten employees at Germany's biggest lender could be headed for the exit.

A spokesman for Deutsche Bank declined to comment on the reports.

But a source familiar with the plans told AFP the numbers reported by the WSJ were broadly accurate.

Cuts would fall in all the regions where the bank operates and affect all areas of activity, including its retail bank, investment bank, asset management and subsidiary Postbank, the same source said.

The gathering – often a stormy occasion in recent years as Deutsche has digested the toxic legacy of the financial crisis – comes weeks after chief executive John Cryan was ousted in favour of Deutsche lifer Christian Sewing in early April.

Cryan, seen as a safe pair of hands who could clean up the bank after the breakneck expansion of the pre-crisis years, was handed the reins in 2015.

But he reported three annual net losses in a row despite hacking back major financial and legal thickets.

Investors were unsatisfied, driving the share price to below half its 2015 level by early 2018 and prompting supervisory board chairman Paul Achleitner to look for a new top manager.

Shares in Deutsche Bank leapt on the news but remained down 0.6 percent on the day by 4:15 pm at €10.90, outperforming the DAX index of German blue-chip shares, down 1.5 percent.

Sewing has vowed to refocus Deutsche Bank on retail and corporate banking, with cuts to its share trading and other investment banking activities, especially in large markets outside Europe like the US and Asia.

The latest job cut plans follow up on some 9,000 posts worldwide and 200 branches in Germany already slashed under Cryan's leadership.