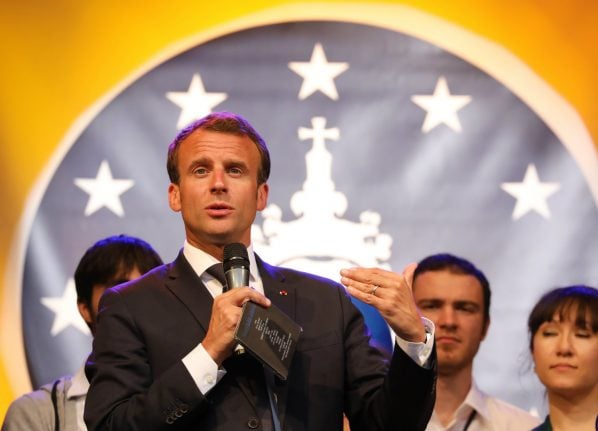 With Berlin so far proving resistant to his flagship reform proposals for the European Union such as a common finance minister or budget, Macron stressed the importance for the bloc to speak with one voice.

At a time when the United States is going its own way in ditching the Iran nuclear deal and the Paris climate accord, as well as threatening allies with punitive trade tariffs, Macron said Europe stands at a critical juncture.

“We stand today at a historic moment for Europe — Europe is in charge of guaranteeing the multilateral order that we created at the end of World War II and which today is sometimes being shaken,” Macron told German broadcasters in an interview.

To do so, Europe needs to be strong, said the French leader.

He acknowledged that Germany needed time to regroup after an indecisive election in September left Chancellor Angela Merkel in months of political limbo before she scraped together a coalition.

But it is now time for “Germany to draw up its response by June” on proposed European reforms, Macron said.

“I very much hope that the chancellor and her government will live up to their responsibilities at this historic moment.

He was speaking in the western German city of Aachen where he was to receive the Charlemagne Prize for his “contagious enthusiasm” for strengthening EU cohesion and integration.

But analysts say the Charlemagne award may be premature, since those lofty goals — a key element of the 40-year-old centrist's pitch to French voters last year — have failed to gain much traction.

Macron has made little headway to date on a range of ambitious projects, most notably a common eurozone budget and finance minister, a joint military “rapid reaction force” or an EU tax on the revenues of technology giants.

Most recently, Macron led the charge by European leaders to try to convince Donald Trump to stick with the deal curbing Iran's nuclear programme, hoping to profit from close ties developed with the mercurial US president.

But his arguments fell on deaf ears and Europe now faces a key test of its influence, unity and diplomatic heft as it tries to keep the deal alive.

“Macron has made some excellent speeches on what Europe needs, but it's hard to see anything concrete coming from it,” said Bertrand Badie, a veteran specialist on international relations at France's Sciences Po university.

The stakes are high and European powers France, Germany and Britain face a period of outright confrontation with a historic ally, over both Iran and Trump's plan to impose tariffs on steel and aluminium imports from the EU.

Washington has already warned that European companies will be subject to fresh sanctions against Tehran, setting a six-month deadline to end any business in Iran or risk heavy penalties.

EU officials have pledged to protect corporate interests, but analysts say it's unclear what measures could be taken to reassure chief executives wary of drawing Trump's wrath.

At Thursday's award ceremony, Macron will make a speech — his fourth major address on the continent's future, already murky given Britain's looming exit from the EU and a surge in populist movements which prioritise national sovereignty.

His office has indicated he will spell out long-term goals for Europe, focusing on the horizon of 2030 to 2050, and won't simply be “rehashing messages he's already given”, an advisor told AFP.

Macron will also participate in what has become a hallmark of his foreign trips, a town-hall debate with around 1,000 students in Aachen, from where Charlemagne launched a series of wars and political reforms to build a continental empire.

Yet for all his calls for a deepening of the EU, Macron is waiting to see if Merkel will join him amid resistance in her conservative CDU party to French plans.

The two leaders have promised to agree a common roadmap for the future of the EU by the time of a major summit in Brussels in June.

But the CDU has explicitly rejected Macron's call for a common eurozone finance minister.

“Macron has presented a series of proposals that are justified and others, for example that of a European finance minister, that we have clearly reacted to and indicated that we do not see… as appropriate,” said Volker Kauder, a key Merkel aide.

Even projects that in theory should be within reach, such as a European banking union or the reinforcement of the European Stability Mechanism for helping out countries which get into financial trouble, have struggled for support in Germany.

What is clear is that Macron is unlikely to get far without Merkel.

“He should take advantage of this award to say, 'I don't need your thanks, I need your help'.”