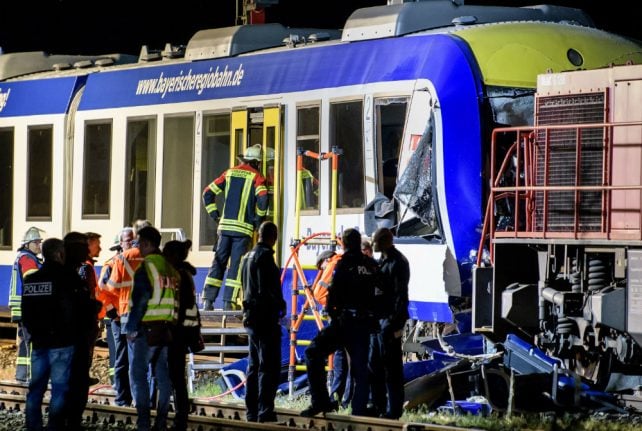 The scene of the crash. Photo: DPA

The unnamed 24-year-old man has been detained on suspicion that his negligence led to the accident, said the regional police service. Prosecutors are now examining whether to file a request to remand him in custody.

The Deutsche Bahn network operator said that a commuter service hit a freight train between Ingolstadt and Augsburg near Aichach station in the country's southern Bavaria region.

“There are some seriously injured and others only lightly,” a Deutsche Bahn spokesman told the German DPA press agency.

German police said that a total of 14 people were hurt.

According to a police spokesman, The 37-year-old train driver and a 73-year-old female passenger were killed.

The company did not immediately provide additional details into the possible causes of the collision.

Shortly after the accident a spokesperson said the two trains had not derailed.

It was also unclear whether signals or switches were possibly set incorrectly.

The Ingolstadt-Augsburg train route has since been closed.

The closure around Aichach station will last at least until Tuesday afternoon. No long-distance trains run through this station, but rather, only regional and freight trains.

The collision brought back memories of a horrific train crash which happened in February 2016, when two trains collided in Bavaria. Nine passengers were killed and around 80 more were injured.