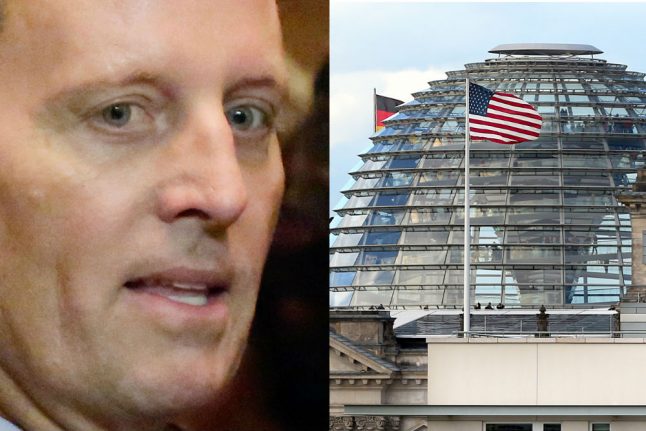 Richard Grenell and the US Embassy in Berlin. Photos: DPA

The first openly gay appointee to the Trump administration, Richard Grenell, will be coming to the German capital with prior diplomatic experience, including a stint as foreign affairs advisor to Mitt Romney during his 2012 presidential campaign.

Here are some more fun facts about US President Trump's new man in Berlin.

This Harvard John F. Kennedy School of Government grad first got his taste of the diplomat lifestyle when appointed in 2001 by then-President George W. Bush to be the American spokesman at the United Nations. He ended up becoming the longest-serving person in this role, leaving the post in 2008.

He then worked as a national security and foreign affairs adviser to Mitt Romney during his 2012 campaign for the White House. This made him the first openly gay spokesman for a Republican presidential candidate – a fact which he proudly states on his official website.

Being an openly gay Republican adviser has not always been easy for Grenell. When tapped by Romney, he faced harsh criticism for his sexual orientation, with one member of the Christian non-profit American Family Association writing on Twitter at the time: “Romney picks out & loud gay as a spokesman. If personnel is policy, his message to the pro-family community: drop dead.”

Romney picks out & loud gay as a spokesman. If personnel is policy, his message to the pro-family community: drop dead.

While working at the UN, he unsuccessfully fought to have his partner, consumer insights expert Matt Lashey, listed as a spouse in the personnel directory, according to the Washington Post.

In 2013, he signed an amicus curiae brief to the Supreme Court in support of same-sex marriage.

As a former Fox News contributor, he called the Supreme Court’s 2015 ruling that granted same-sex marriage across the United States “a huge win”, arguing that conservatives should rejoice because it meant that the “government doesn’t get to tell people what to do.”

In 2013, Grenell revealed he had been diagnosed with non-Hodgkins lymphoma. But by later that year, he announced he was in remission.

With his partner, Lashey, he created an app to help chemotherapy patients track their activities and treatment.

His relationship with Germany

Grenell’s position representing the United States to Germany may be more confrontational than those who have held the position more recently given Trump’s opposing views with Angela Merkel on key issues, from trade to fighting climate change.

Trump’s decision to pull the United States out of the international Paris climate accord, which Merkel has called “unfortunate”, left the US President standing alone on the issue during the G20 summit in Hamburg.

As ambassador, Grenell will have to get on board with this stance, though it doesn’t seem that will be a problem for him, judging from one of his tweets last year.

“We have an unbreakable bond with Europe,” Grenell wrote in the tweet on June 2nd of last year, which is still pinned to the top of his Twitter feed.

We have an unbreakable bond with Europe. We share many of the same values. We just disagree on what the Paris Accord does for US taxpayers.

Another issue to tackle could be the Western world’s relationship with Iran.

Grenell has called current restraints on Iran’s nuclear programme “weak”, according to CNN, and the broadcaster speculates that Grenell could seek to target increased trade between German companies and Iran as a problem.

He furthermore has recently criticized Berlin's attitude to the Syrian war: “French and British forces are joining the US in attacking Syria over the heinous chemical attack on civilians, and Germany should have joined this P3 group,” he said.

Grenell's dog, Lola, features in many of his social media posts, and factors into his Twitter bio: “I'm stronger after cancer. my dog runs my life. imperfect follower of Christ.”