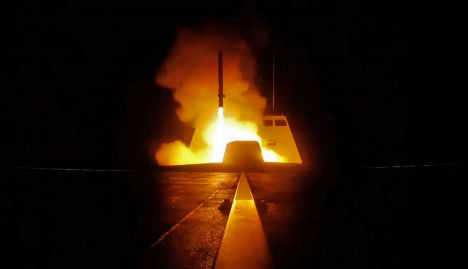 A photograph of one of the cruise missiles being launched from a French frigate on Saturday. Photo: Handout / AFP / ECPAD
“We support the fact that our US, British and French allies … assumed their responsibilities. The military intervention was necessary and appropriate,” Merkel said in a statement.
“Everything leads us to believe that (Assad) bears responsibility” for the Douma attack, Merkel said.
The chancellor on Thursday had ruled out Germany joining any military action against Syria.
On Saturday she said it appeared likely that the Syrian regime “had used  chemical weapons against its own people on several occasions in the past”.
Merkel added: “A century after the end of World War I… we must fight against the erosion of the (international) convention on chemical weapons”.
“Germany will undertake, in a determined way, diplomatic efforts to support this,” Merkel said.