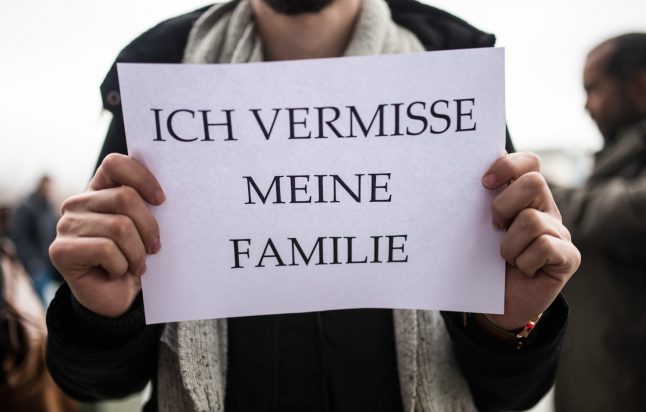 Conservatives among Merkel's Christian Democrats are keen to restrict as heavily as possible so-called “family reunifications” that would allow some of the million-plus migrants and refugees who have arrived since 2015 to bring in relatives.

That has stirred the ire of Social Democrats (SPD), the reluctant junior partners who helped Merkel into office to end the longest period of post-election limbo in post-World War II German history.

In their painstakingly-negotiated coalition deal, the parties agreed that up to 1,000 people per month could enter Germany under family reunification, with only immediate relatives eligible.

New Interior Minister Horst Seehofer is eager to tighten the screws further, with a draft law that would prevent people dependent on social benefits from bringing in family members and further restrict which relations are eligible, including ruling out siblings.

Many people who arrived in Germany as refugees are yet to join the labour market, undergoing job training or language classes, and would therefore not qualify.

READ MORE: Life in suspense – the refugees who can't reunite with their families

Seehofer is a former leader of the ultra-conservative CSU, the smaller Bavarian sister party of Merkel's more centrist CDU.

He is keen to burnish his outfit's anti-immigration credentials ahead of a state election later this year, when they will face a stiff challenge from anti-Islam, anti-immigration party Alternative for Germany (AfD).

“We don't want an influx into the social system. That's also how we've discussed this within the coalition,” he told Der Spiegel magazine's Saturday edition.

Two years ago, Seehofer blasted Merkel's 2015 decision to open Germany's borders to refugees arriving in Europe via the so-called “Balkan route” from the Middle East, saying it had produced a “rule of injustice” in Europe's most populous nation.

Arriving in his Berlin ministry after being ejected from the state premiership in prosperous Bavaria, he lost no time before stirring up controversy with a declaration that “Islam does not belong to Germany”, which is home to around four million Muslims.

'Coalition would be over'

Social democrats, already smarting from the concessions made on immigration in the coalition agreement, have bristled at Seehofer's sallies in the media and at the draft law.

Foreign Minister Heiko Maas declared that “we will not agree to any draft which we consider to be mainly aimed at reducing numbers” allowed to enter Germany.

But Seehofer's CSU party colleagues have backed him to the hilt.

“If the Social Democrats don't cooperate, the 'grand coalition' would be over” less than a month after Merkel was sworn in, deputy leader of the conservative parliamentary group Georg Nuesslein told the Augsburger Allgemeine newspaper.

The family reunification row is just one front in a broader battle over immigration, integration and Islam in German society that has pitted the SPD against the CDU/CSU.

Seehofer is also keen to speed up expulsions of people whose asylum applications are refused, many of whom spend months or years contesting the decisions in the courts or acquire a “tolerated” residence status.

After weeks of mud-slinging, some among the conservatives are uncomfortable with the relentless focus on such themes.

“The question is: do we really win elections by naming the topics that stir people up without changing anything?” asked Armin Laschet, CDU state premier of North Rhine-Westphalia.

Merkel will be counting on the support of moderates like Laschet to contain bubbling discontent on the right of her party.

Health Minister Jens Spahn, a rising star of the CDU's right wing seen as a potential future candidate for the chancellorship, has spent his first weeks in office giving interviews urging more “law and order” in troubled city districts.

He has also chided feminist pro-abortion campaigners, saying they cared more about animal rights than unborn children, and declared that long-term unemployed people were not poor.

A government spokesman said Spahn's statements were his “personal” views, not government policy.