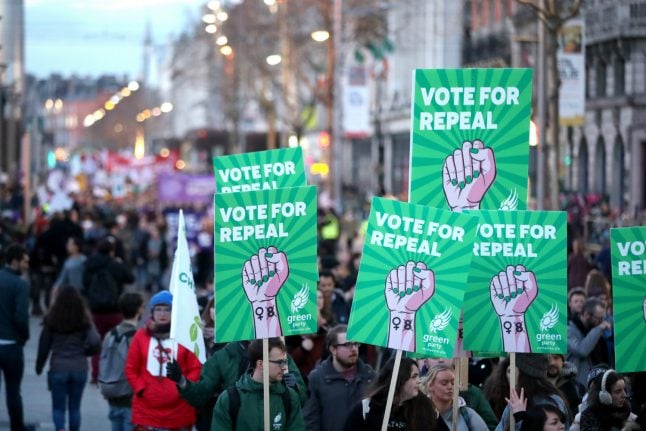 The Berlin-Ireland Pro Choice Solidarity group is trying to remove the stigma of abortion, raise funds for women in need and highlight the upcoming Irish referendum on abortion laws at the fundraiser on Friday April 6th.

The referendum on repealing article 40.3.3, known as the eighth amendment, takes place on May 25th. The amendment, which has been in place since 1983, bans abortion even in cases of rape or where a foetus has a fatal abnormality.

If Ireland votes in favour of repeal, the government has said it will introduce legislation permitting unrestricted abortion during the first 12 weeks of pregnancy.

A campaign called Home To Vote is calling on Irish people across the world to travel home to exercise their right to vote because the country does not allow overseas voting.

Irish expats living in Germany have already booked flights home to vote or to campaign, with some posting about it on social media sites.  Irish citizens are legally allowed to participate in the referendum if they have lived abroad for 18 months or under.

SEE ALSO: Abortion in Germany – 'where providing information is a crime'

Three years ago thousands of Irish citizens returned home to vote in a referendum on same-sex marriage, in which 62 per cent of voters chose to change the law.

Plugged In For Repeal, billed as a night of female and non-binary fronted Irish and Polish live music, spoken word and dancing in solidarity with the fight for reproductive rights in Ireland, will take place at Bei Ruth in Neukölln from 8pm.

Money raised will go to charities such as the Abortion Support Network, which provides support to women from Ireland and Northern Ireland affected by restrictive abortion laws.

Dervla O’Malley, a co-founder of the Berlin-Ireland Pro Choice group, was born in Galway but has lived in Berlin for several years. She hopes Irish expats in Berlin will attend, as well as other pro-choice supporters.

“We hope Irish people living in this area will come and support us. We also welcome anyone who supports reproductive rights,” she told The Local.

“We are being really positive and we want to be able to celebrate that things are changing – but there really are a lot of sad stories.”

The Berlin group was launched around five years ago following the death of Savita Halappanavar, a 31-year-old dentist who died in 2012 at University Hospital Galway in Ireland due to the complications of a septic miscarriage.

“We had quite a few protests outside the Irish Embassy and vigils,” said O’Malley.  “Every year on the anniversary of Savita’s death we hold a vigil.”

They started hosting fundraisers in 2015 and selling T-shirts to help raise money for abortion support charities.

O’Malley added: “We like to keep it upbeat and have fun because abortion is quite a taboo and stigmatised subject.”

“We did an event two years ago in Bei Ruth and we called it ‘Thank God For Abortion’ because a performer from New York was over and that was her project.”

The group is closely involved with Polish campaigners in Berlin protesting against attempts by the Polish government to restrict abortion there.

“We expect some Polish people to be at our event too because we share a common problem,” O’Malley said.

For information on voting in the referendum visit the Irish Citizens’ Information website.