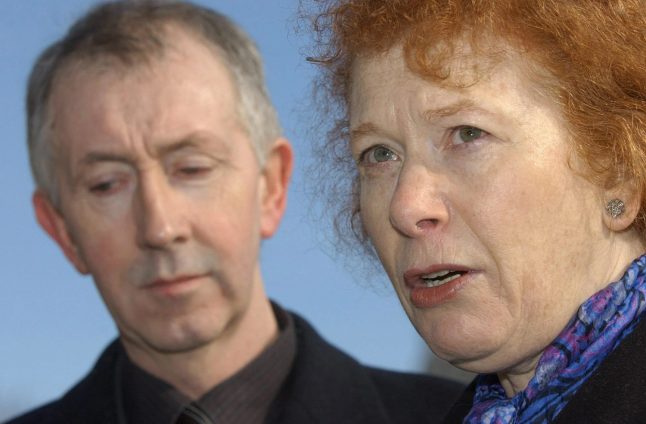 Erica Duggan, mother of a Brit who died in Germany, is still questioning what really happened to her son. Photo: DPA

“I have no voice here and the prosecution sees us as opponents,” Duggan said on Wednesday. “That is the cruellest thing. They are supposed to be solving the case of my dead son, and yet I am their enemy.”

The British student Jeremiah Duggan died on March 27th, 2003 after being hit by two cars in Wiesbaden, near Frankfurt. In the days leading up to his death, Duggan had been part of a LaRouche youth event where he reportedly admitted to being both British and Jewish, identities to which the right-wing group were vehemently opposed.

Many, including the Duggan family, are convinced that his death was related to the LaRouche group, despite the German authorities' conclusion that the cause of death was suicide.

“My son came to Germany, of all places, and became a scapegoat for anti-Semitism and hate,” Erica Duggan said on Wednesday.

Originally joining the LaRouche Student Summit in Wiesbaden because he wanted to protest the Iraq War, Jeremiah Duggan was shocked to find that the group was actually openly anti-Semitic and anti-British, claimed his mother.

The case was reopened in 2012 when a Frankfurt court issued in a rare investigation order forcing Wiesbaden state prosecutors to re-review his death. This month the Wiesbaden prosecutors officially concluded their investigation, reaffirming the earlier conclusion of suicide. This decision has left the family baffled and frustrated.

“It is hard to believe in the rule of law in Germany when I can’t get the basic questions answered about what happened to my son,” Duggan told a small gathering of journalists.

The Duggan family have filed a complaint with the Frankfurt High Court asking them to reopen the investigation.

One of the chief complaints that has led Duggan and her attorney to file the complaint is the Wiesbaden prosecution’s refusal to interview people believed to be potential suspects.

“We feel that there were many errors made throughout the investigation and a lot of sloppiness on the part of the prosecution”, claimed Duggan’s attorney Serdar Kaya. “There have been allegations that (Duggan) may have been beaten and chased by members of this right-wing organisation, but the prosecution did not interview the potential suspects.”

“The prosecution claims that these individuals would use their right to remain silent, and would not talk to the investigation anyway,” Kaya said.

But this violates the responsibility of German prosecutions to pursue the truth to its fullest, he added. “They have the duty to carry out the law and they cannot use the excuse that ‘they won’t talk to us anyway’ to justify not doing their job.”

'The prosecution sees us as their opponents'

Erica Duggan also alleges that prosecutors focused on proving the theory of suicide rather than looking at all different possibilities.

“They thought from day one that this had to be suicide, and they have spent the last 15 years trying to re-prove that this was the case,” said Duggan.

In the press conference, Duggan and her attorney presented various other possibilities for why Jeremiah may have died, including harassment from the far-right group for being a perceived spy. But her lawyer stressed that they will not know the real answer “unless the prosecution starts asking the right people.”

In filing a complaint with the Frankfurt High Court, Duggan and her attorneys are hoping to reopen the investigation under a new division, as opposed to the Wiesbaden prosecution team which has overseen the case since it was originally opened in 2003.

Their ultimate hope is that more interviews with LaRouche members and others who know about Jeremiah Duggan’s whereabouts in the days before his death will lead to new answers to long-asked questions.

Duggan herself admits, however, that the process likely has a long future ahead of it.

“Complaining to the court will likely add another five years, making this case 20 years in total. I will probably be about to fall into my grave, and still be coming to Germany to fight for my son,” she said.

Despite the arduous, emotional process, Duggan’s reasoning for her continued fight is clear: justice for people like her son.

“If I can get justice for Jeremiah, maybe we can change the German justice system to help more people.”