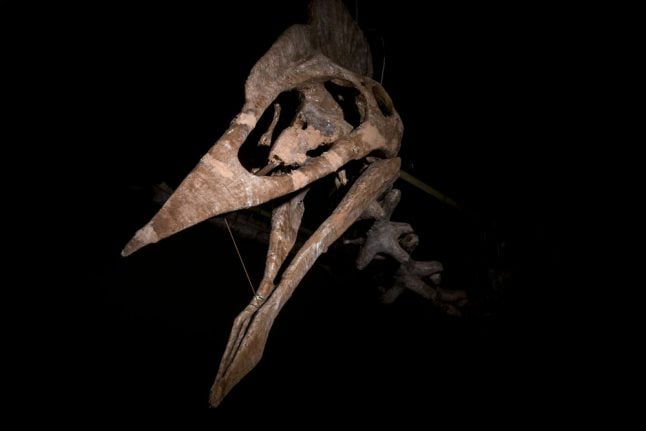 The half-tonne beast, which scientists believe stood as tall as a giraffe and had a wing span of between 12 and 20 metres, went on display for the first time at the Altmühltal Dinosaur Museum in Bavaria on Friday.

The predator is the showpiece of the museum's “Emperors of the Skies” exhibition, dedicated to pterosaurs – flying reptiles that were close cousins of the dinosaurs.

Scientists say the behemoth, discovered in Romania in 2009, has a physique different to that of other previously discovered pterosaur skeletons.

“It's unquestionably, absolutely a sensational find,” said Raimund Albersdörfer, a paleontologist at the Dinosaur Museum Altmühltal. “Just due to the sheer size of this animal. The special thing about this find is that we didn't just find one or two bones, we got enough skeletal elements to reconstruct the whole body. That wasn't scientifically possible with a pterosaur of this size until now. ”

The find dates to the Cretaceous period, the last in which dinosaurs and pterosaurs roamed the earth. It's thought the giant pterodactyl had no natural predators and once dominated the food chain on what was then a subtropical island.

'Dracula' will be on display at the Altmühltal Dinosaur Museum until early November.