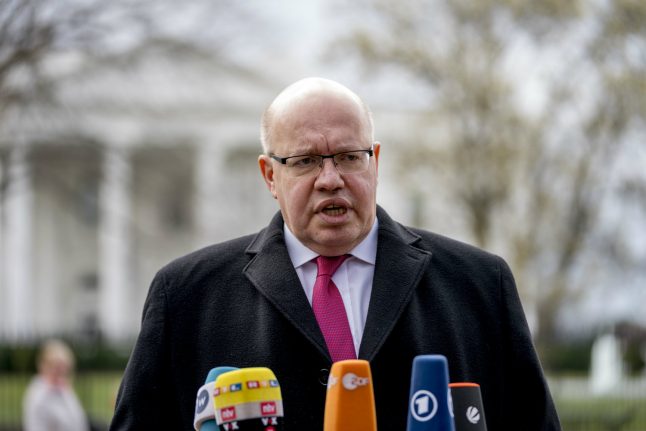 Talks with US officials could make it “possible to find a solution that can still avoid a decline into a heavy trade conflict,” German Economy Minister Peter Altmaier told reporters outside the White House.

Such a compromise would not, however, be a final accord but would exempt the EU from the tariffs provisionally while negotiations continued, he said at a later press conference, ahead of Friday's scheduled implementation of the tariffs.

“With regards to content (of an agreement) we will need several weeks to find a reasonable solution,” Altmaier said.

US trading partners, industry groups, Republican lawmakers and markets have all been on tenterhooks amid fears of a global trade war since Trump this month suddenly announced steep duties of 25 percent on steel and 10 percent on aluminum, citing the need to protect US national security interests.

Altmaier offered no details about any possible solution but said US Commerce Secretary Wilbur Ross shared his optimism.

“We had a very constructive preliminary exchange on all relevant matters in our economic relationships with an eye toward relaxing trade tensions,” the officials said in a joint statement.

“We anticipate further discussions over the next few days.”

The announcement comes ahead of this week's planned visit to Washington by EU Trade Commissioner Cecilia Malmstroem, who likewise is due to meet Ross and other American officials Tuesday and Wednesday.

After initially vowing to allow no exemptions, Washington has since said Canada and Mexico, major suppliers of the metals to US companies, will be exempt at least temporarily.

'The EU should be excluded'

European officials have already threatened to retaliate against Trump's tariffs, and produced a list of US exports that could be targeted, including Levi's blue jeans, Harley-Davidson motorcycles and peanut butter.

But a compromise would lessen fears of tit-for-tat trade measures that could dampen economic momentum and exacerbate inflationary pressures.

“I am in close contact with the EU commissioner in charge,” Altmaier said, referring to Malmstroem. “Germany is supporting these talks.”

He also said he was due to meet with US Trade Representative Robert Lighthizer on Tuesday.

Speaking to reporters in Brussels on Monday, Malmstroem said she was willing to work constructively with Washington to reach a joint solution but reiterated that European exporters should not be subject to the new tariffs.

“The EU should be excluded as a whole,” she said.

Speaking on the margins of the G20 finance ministers meeting in Buenos Aires, Le Maire said he told US Treasury Secretary Steven Mnuchin “very frankly” that Europe should be excluded from the tariffs.

“To tell you the bottom line, no one would understand if the EU… is not globally exempt from this,” Le Maire said.

Europe exported $6.5 billion worth of steel and $1.4 billion in aluminum last year to the United States.

The Commerce Department also began accepting applications from US importers for exemptions on particular steel and aluminum products.

The department said this would help make the tariffs more targeted and reduce the likelihood of higher costs for manufacturers and retailers.

Industry representatives have continued lobbying the White House, hoping to pressure Trump into reversing course on the tariffs.

In a letter obtained Sunday by The Wall Street Journal, trade groups said the tariffs would cause “a chain reaction of negative consequences.”