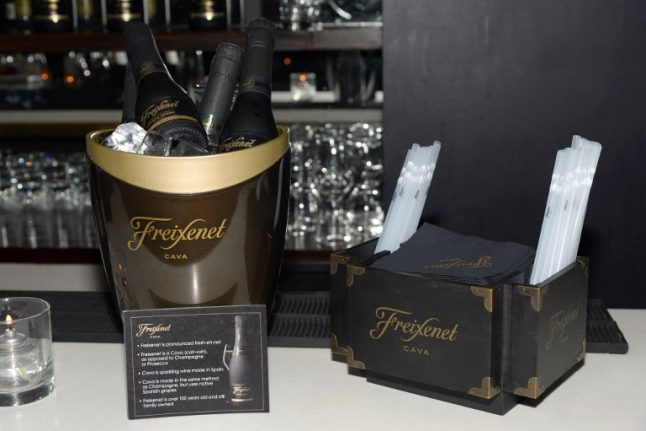 Freixenet, founded in 1914, is the leader in cava bubbly. Photo: Andrew Toth/AFP
“Henkell, the branch of the Oetker group specialised in sparkling wine, has signed an accord to acquire 50.67 percent of the shares in Freixenet S.A.,” a joint statement read.
Neither firm indicated a value for a deal which follows two years of talks and has cost the Germans around €220 million ($270 million), according to media reports.
Freixenet, founded in 1914, is the leader in cava bubbly with its native grapes and use of the 'traditional' champenoise method comprising a second fermentation in the bottle in underground caves.
Based in cava country to the southwest of Barcelona and with a workforce of some 1,400 — to 1,922 for Henkell — it costs far less than even the cheapest bottle of champagne.
“With Henkell, we have found a long-term partner which will strongly reinforce Freixenet and help us to preserve our identity and tradition with an increased international presence,” Freixenet chairman Jose Luis Bonet said.
Bonet had at one stage last year indicated he would consider moving the company HQ outside Catalonia, after leaders of the wealthy region declared independence from Spain, sparking political unrest and an ugly standoff with Madrid.
But following a crackdown on the secessionists by the central government Bonet said the firm would stay put, stating that “Freixenet is a Catalan company and, consequently, Spanish.”
Url copied to clipboard!