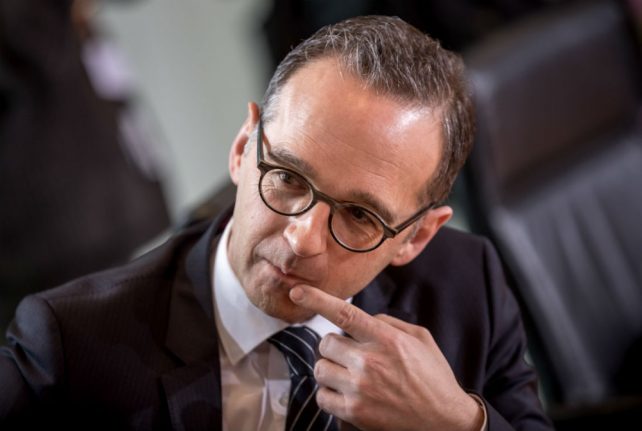 The 51-year-old Social Democrat is to be officially designated by his centre-left party on Friday to succeed party colleague Sigmar Gabriel, reported national news agency DPA and news weeklies Der Spiegel and Focus.

Gabriel himself had announced that the leadership of the Social Democratic Party (SPD) had decided that he would not have a ministerial post in Merkel's fourth-term government to be launched next Wednesday.

If the reports are confirmed, Mass “will do an excellent job,” said Gabriel, the current head of German diplomacy, at a press conference.

Maas has no particular diplomatic experience but has earned a solid reputation in the past four years as justice and consumer affairs minister.

He is known as an outspoken critic of the far right and online hate speech and has forced Internet giants to take down incendiary posts that breach German laws, with the threat of heavy fines.

German media have also reported that the post of finance minister and vice chancellor will go to Olaf Scholz, the SPD mayor of the city-state of Hamburg.

Merkel drew much criticism from within her Christian Democrats for handing the SPD the finance portfolio, traditionally the preserve of her conservatives.

But most observers expect Scholz, a no-nonsense centrist within the SPD, to maintain fiscal rigour and a tight grip on public finances like his predecessor Wolfgang Schäuble.

READ ALSO: 'I became a politician because of Auschwitz' – meet Germany's justice minister