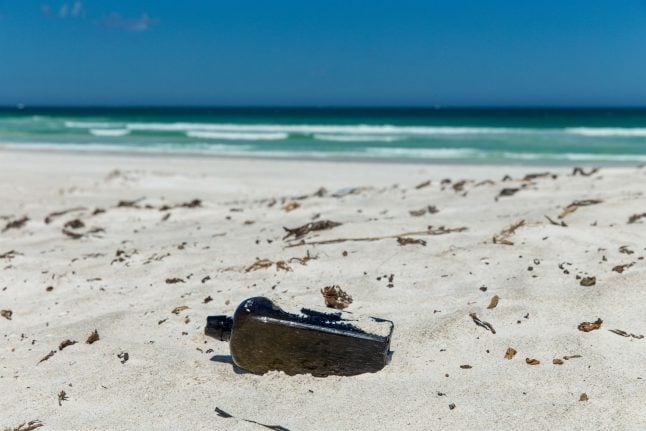 As the north German trading ship Paula swept eastwards across the Indian Ocean on June 18th 1886, a member of her crew tossed a bottle into the waters below. It contained a piece of paper noting the vessel’s coordinates, the date when it was thrown out, and an address in Hamburg to send it back to.

The crew could have hardly expected that it would take 132 years before contact was made.

The bottle was finally found at the beginning of this year by photographer Tonya Illman as she walked along the shore of Wedge Island, a remote slice of land off Australia’s barren west coast.

When Illman first spotted the bottle pocking out from the sand, she thought it was just rubbish. “But then I thought ‘that could look good on by bookshelf'”, she said. When she picked it up and looked a little closer she saw the paper curled up inside.

The message also encouraged the finder to fill out a form on the backside and then send it back to the German Hydrographic Office in Hamburg. A painting of the Paula. DPA

Illman took the bottle to the state museum of Western Australia, which in turn contacted the German shipping authorities in Bremen Harbour. It soon became clear that the bottle was the real deal.

Paula, whose home port was Elsfleth near Bremen, was under steam for Indonesia under the captaincy of an O. Diekmann. The handwriting on the paper matches his. And in the ship’s log book an entry states that a bottle was thrown overboard on June 18th.

On that date the Paula was roughly 950 kilometres north of the beach where the bottle was found. Experts assume that the bottle only spent a year at sea before being washed up on the beach of Wedge Island. It was then probably buried in the sand for over a century before being turned up by a storm.

The discovery has smashed the record contained in the Guinness book of records – which stood at 108 years – for the longest time it has taken to find a message in a bottle.

It wasn’t unusual for trading ships to undertake scientific missions in the 19th century. The idea was to collect more information on the movements and speed of the oceans’ currents.

Physicist Georg von Neumayer, first director of the German Hydrographic Office, came up with the idea and between 1864 and 1933 more than 6,000 bottles were thrown overboard at the request of the office. Only 662 ever came back – the last of them being in 1934. With the recent discovery from the Paula that discovery has finally been nudged up to 663.

Illman has given her treasure to the state museum of Western Australia, which will put it on display from Thursday onward.