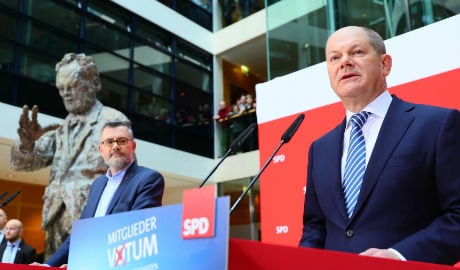 Dietmar Nietan, the head of the SPD's counting commission, and Olaf Scholz, deputy SPD chairman announce the result at the party's Berlin headquarters on Sunday. Photo: Michael Kappeler / dpa
The vote clears the last hurdle in the way of a fourth term for the veteran German leader.
But the chancellor, in power for 12 years, will go into her fourth term with far weaker cards than before, as she had to pay a high price to coax the reluctant Social Democratic Party (SPD) back into another loveless “grand coalition”.
Two in three of the SPD's rank and file backed a new partnership with Merkel's conservatives, heralding an end to the political stalemate that has plagued Europe's biggest economy since September's inconclusive elections.
Stung by their worst post-war results, the SPD had initially ruled out another four years under Merkel's shadow. But after Merkel's attempt to cobble together a government with two smaller parties failed, the SPD relented.
With the party riven over its way forward, its leadership promised its more than 460,000 members the final say on any coalition deal.
“We now have clarity. The SPD will be in the next government,” said SPD's caretaker chairman Olaf Scholz, adding that his party plans to send three male and three female ministers to the cabinet.
With the SPD's emphatic decision to move forward with a new partnership, Merkel is expected to launch her fourth government by mid-March.
But Merkel faces a far rockier road ahead than in the last four years. Unlike in their previous partnership when Merkel's conservatives and the SPD enjoyed a crushing majority, this time they now have only a slim 56 percent (399 out of total 709) of seats in parliament.
Both sides had been weakened as voters angry about the arrival of more than a million asylum seekers in Germany since 2015 turned to the far-right party Alternative for Germany (AfD).
Wary that the AfD has further fragmented the political landscape and that voters are calling for change, Merkel's conservatives and the SPD have also inserted a clause to review their cooperation in two years.
And despite Sunday's positive vote outcome, dissenting voices in the SPD remain loud.
The party's youth chief Kevin Kühnert, who ran an impassioned campaign against the planned coalition known as “GroKo”, expressed disappointment at the vote result on Twitter.
Within her ranks too, Merkel, who once seemed invincible, is looking increasingly vulnerable as calls grow louder for renewal.
Opponents of her liberal refugee policy have grown more outspoken, while the conservative wing of her party is seething at having lost control of the powerful finance ministry to the Social Democrats as part of the coalition deal.
For the chancellor,who is under pressure within her party to rejuvenate her ranks, the clock is essentially ticking to groom her successor.
At a congress this week, her party formally appointed its new general secretary, Annegret Kramp-Karrenbauer, tapped by Merkel to kickstart the renewal process.
Crucially, Merkel has also named one of her most outspoken CDU critics, Jens Spahn, by bringing him into her next cabinet as health minister.
Spahn, 37, a former deputy to hardliner Wolfgang Schäuble at the finance ministry, has repeatedly slammed Merkel's centrist policies, particularly on immigration. He has also advocated a sharp conservative shift in a bid to woo back voters from the AfD, which garnered nearly 13 percent in the September election.
Announcing the new line-up, Merkel called Spahn “a representative of the younger generation” who wouldplay a constructive role.
Noting that at 63 she will be the oldest member of government, Merkel filled the CDU ministries with loyalists, keeping Ursula von der Leyen at the defence ministry, putting close ally Peter Altmaier on the economic affairs
brief and placing Julia Klöckner in the agriculture job.
The cabinet picks “are future-oriented — they bring together experience with new faces in a good mix”, Merkel said, while admitting it had required some “painful” choices.