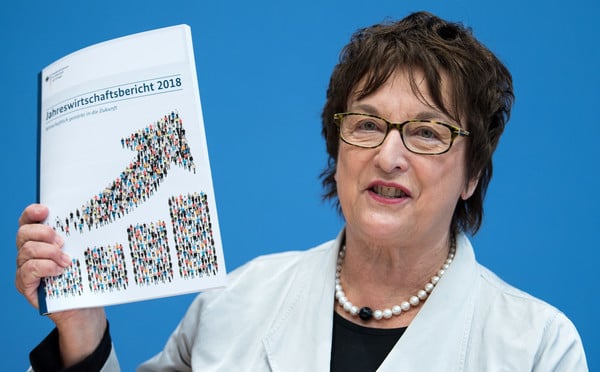 Economy Minister Brigitte Zypries. Photo: Bernd von Jutrczenka/DPA
Last month it emerged that Chinese billionaire Li Shufu had quietly bought a near 10-percent stake worth around €7.2 billion ($8.9 billion) in German car giant Daimler —  making him the group's largest shareholder.
“We must always adapt our law on the external economy according to new developments, including the threshold at which (the government) can become involved,” Economy Minister Brigitte Zypries told the weekly Der Spiegel.
Currently, Berlin can scrutinise a transaction and possibly prevent it, if the foreign investor seizes a stake worth more than 25 percent of a company's capital.
“The fact is, the investors can often exert considerable influence on a business, even with a smaller stake,” said Zypries, a Social Democrat.
China's increasing interest in German companies has sparked unease in Europe's biggest economy. The distrust is all the greater as EU nations are more open to investment from abroad than Beijing allows on its territory.
The subject will “have to be on the agenda of the new government, particularly with regard to strategic infrastructures, such as energy, transport or internet sectors”, Zypries said.
Germans are waiting to discover on Sunday whether the Social Democrats will approve a coalition with Chancellor Angela Merkel's Christian Democratic Union, bringing an end to a five-month stalemate following inconclusive elections.
German ministers agreed last year to expand government powers to scrutinise takeover bids from abroad, especially in sectors affecting critical infrastructure, and to extend the range of deals eligible for official probes.
The move followed the 2016 Chinese takeover of industrial robotics firm Kuka and US-based Tesla Motors' buying-up of factory automation specialist Grohmann Engineering.
That same year also saw Washington block a Chinese acquisition bid for German microchip maker Aixtron, warning its products could have military applications.