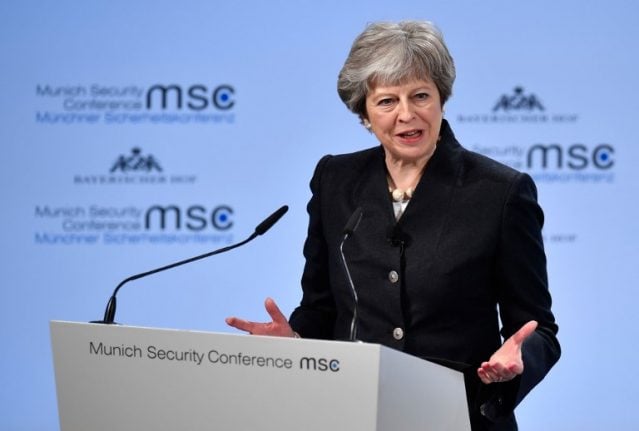 British PM Theresa May gives a speech during the Munich Security Conference on Saturday. Photo: Thomas Kienzle/AFP
In a speech at the Munich Security Conference, she acknowledged that no deal currently exists between the EU and a third country “that captures the full depth and breadth of our existing relationship”.
But she said there was no reason both sides could not come up with practical ways to create a “deep and special partnership” on security.
“We cannot delay discussions on this,” May said.
She also warned European partners not to put politics above cooperation against crime and terrorism.
“This cannot be a time when any of us allow competition between partners, rigid institutional restrictions or deep-seated ideology to inhibit our cooperation and jeopardize the security of our citizens,” May told the audience.
She cautioned that if there were no special deal on security by the time Britain leaves the bloc in March 2019, speedy extraditions under the European Arrest Warrant “would cease”.
And if the UK were no longer part of Europol, the EU's law enforcement agency, information sharing would be hampered — undermining the fight against terrorism, organised crime and cyberattacks.
“This would damage us both and put all our citizens at greater risk,” May said, urging European leaders to show “some real creativity and ambition” in coming up with a bespoke UK-EU security pact.
“We must now move with urgency to put in place the treaty to protect all European citizens wherever they are in Europe,” May said.
Not 'at war' with London
Some experts have warned that cooperation on police and security matters could be limited by Britain's refusal to fully accept the jurisdiction of the European Court of Justice (ECJ) after Brexit.
May appeared to respond to those concerns by saying the UK would “respect the remit” of the ECJ when working with EU agencies, in return for “respect for our unique status as a third country”.
“But as a country outside the European Union, we will have our own sovereign legal order, so the European Court of Justice will no longer have jurisdiction in the United Kingdom.”
European Commission President Jean-Claude Juncker, in his own speech at the top security gathering in Munich, said the bloc was “not at war” with the UK and warned against mixing up security with other Brexit issues.
“The security bridge between the UK and the EU will be maintained,” he said. “But I don't want throw security considerations in the same pot as trade policy issues.”
'Easier if you stayed'
May last year irked many European peers when she suggested that Britain, the biggest military power in the bloc and a nuclear-armed Nato member, might hold back on security cooperation if it could not get a good trade deal once it quits the EU's single market and customs union.
But there was no hint of that in Saturday's address, the latest in a clutch of speeches by senior British officials as the government faces pressure to clarify its ambitions for Brexit.
There has been little progress in recent months in Britain's negotiations with the EU on the nation's future relationship with the bloc.
EU negotiator Michel Barnier warned last week that there were still “substantial disagreements” with Britain on a post Brexit transition period to ease the pain of the split.
“Things would be so much easier if you stayed,” Munich Security Conference chairman Wolfgang Ischinger quipped after May's speech, drawing applause.
May replied: “There's no question of a second referendum or going back on that vote.”
By AFP's Michelle Fitzpatrick and Joseph Schmid