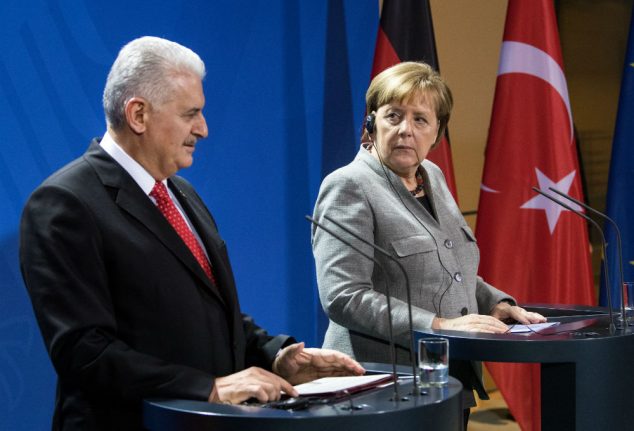 Speaking at a Berlin joint press conference with Yildirim, Merkel said that both sides “have an interest in improving ties — possibly on the basis of shared values, but that isn't easy right now”.

She reiterated German concerns about the rule of law in NATO partner Turkey, where President Recep Tayyip Erdogan's government responded to a 2016 failed coup attempt with mass arrests.

“We know our bilateral relations have entered choppy waters and to a degree are still there, but we're trying step by step to resolve the cases”, she said.

Merkel pointed to the high-profile case of Die Welt correspondent Deniz Yucel — who the previous day marked one year in Turkish custody — and other German citizens Berlin says are held for political reasons.

SEE ALSO: One year on and German journalist still sits in Turkish jail without charge

Such detentions had “clouded” relations and marked a continuing “burden”, she said.

Yildirim said Turkish courts were working through a huge backlog of cases but voiced hope that Yucel would soon face a court, adding that any hearing offered a measure of “hope”.

The premier insisted on the independence of Turkish courts and added: “We do not want this case to hurt … relations between Germany and Turkey”.

Merkel was also cool on Turkey's hopes of joining an EU customs union, saying the bloc first needed “to be more convinced of progress on the rule of law”, where there had been “no developments” recently.

The press conference was disrupted by a journalist with a Kurdish news site who held up photos of conflict casualties.

Yildirim dismissed them as “propaganda” and said they depicted “other events”.

He also stressed that, amid Syria's war and refugee crisis, “we have welcomed 3.5 million Syrians, we have shared our bread with them … Our hands are clean, we know what we are doing.”