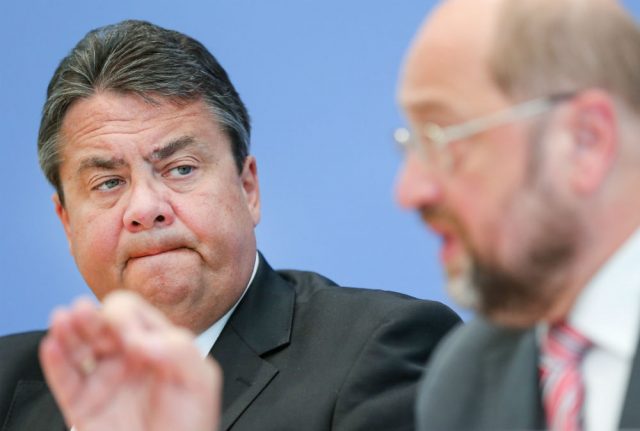 “What's left is regret at how little respect there is in the Social Democratic Party in our dealings with one another, and how little someone's word counts for,” Gabriel told the Funke newspaper group.

The rare public broadside at his comrades came after the SPD and Merkel's conservative CDU/CSU bloc announced a hard-fought coalition deal Wednesday that could see Schulz claim the foreign ministry.

It was Schulz's second major U-turn since September elections that ground the storied centre-left party down to just 20.5 percent of the vote.

He had previously ruled out both repeating the “grand coalition” for a third time under Merkel, and serving as a minister in her cabinet.

It has been only a year since Gabriel gave up the SPD leadership to make way for Schulz, who was then seen as the better candidate to challenge Merkel in September's election.

No job for Gabriel

Although Gabriel is one of Germany's most popular politicians — scoring a 57-percent approval rating in an ARD television poll this month — there is no job waiting in Merkel's fourth government.

“I enjoyed taking on the office of foreign minister, and in the eyes of the public I apparently did a good and successful job,” Gabriel said.

“I regret that it's clear the public's esteem for my work means absolutely nothing to the SPD leadership.”

Gabriel is still in office in a caretaker capacity while the proposed coalition deal is put to a referendum of SPD members.

Following the humiliation by Schulz, his involvement in next week's Munich Security Conference alongside high-profile peers like Russian Foreign Minister Sergei Lavrov or US Defence Secretary James Mattis was briefly in doubt.

But a foreign ministry spokesman confirmed Friday that Gabriel would attend.

Neither is Gabriel the only one feeling let down by the results of party leaders' days-long negotiating marathon earlier this week.

CDU members are smarting at having to cede the vital finance ministry to the SPD.

And politicians from across Germany's former communist East have complained that apart from Merkel herself, no-one from their region will sit at the cabinet table in Berlin.

“It's remarkable and regrettable that so far not a single politician from the East is represented in the cabinet,” Reiner Haseloff, state premier of Saxony-Anhalt told news agency DPA.