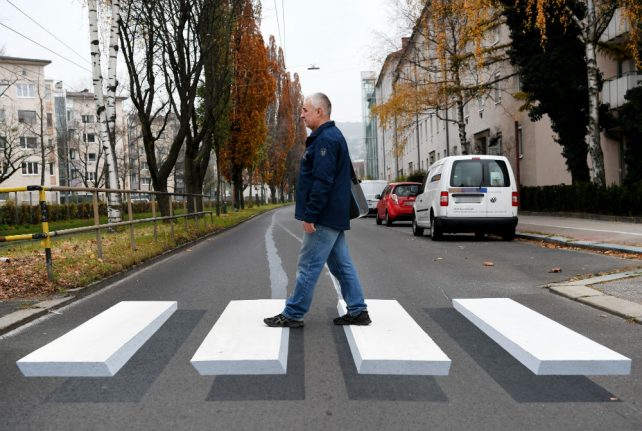 The white stripes with graphic effects are proposed to be painted on the road in Braunschweig’s Lehndorf district, where locals have been complaining that motorists drive too fast on a particular street despite a speed limit of 30 km/h and a traditional zebra crossing in place.

Motorists will slow down and brake upon seeing the crossing as it looks like it's floating, according to Lehndorf's deputy mayor Frank Schröter, who’s also an engineer at the Institute for Traffic and Road Construction at the Technical University of Braunschweig.

Similar to paintings on the ground of abysses made by street artists, where passers-by reflexively hop to the side so as not to fall in, it is hoped that this concept will help increase road safety in Braunschweig.

“When I heard about the 3D pedestrian crossing, I thought it would be a good opportunity,” Schröter said.

On Wednesday the municipal council will decide on whether the new crossing will be set up as per Schröter’s (Green Party) proposal for the busy Lehndorf street.

Until now, the concept has only been tested in Germany; if implemented, Braunschweig could be home to the country’s first official floating crosswalk.

“Everything that raises awareness is good for road safety,” said a German Automotive Club (ADAC) spokesperson from the state of Lower Saxony.

The ADAC is in favour of the idea and rejects claims that the stripes will increase the risk of rear-end collisions due to motorists braking abruptly upon seeing them.

The concept originated in Iceland and has had moderate success. Motorists have quickly gotten used to the new crosswalk, the inventor of the concept, Ralf Trylla, told local newspaper Braunschweiger Zeitung.

It's also been introduced in Linz, Austria – here, too, it's been moderately successful.

The stripes only have an effect from one direction, said Markus Hein, traffic councillor of Linz. The effect moreover disappears at night and in wet conditions. Furthermore, he argues, it can only be seen from up close and at low speeds.

“The zebra crossing works best in photos. For us in Linz, this is a rather funny marketing gag,” Hein said.

In the meantime, other German cities are also considering the use off floating pedestrian crossings.

“We simply have to try it out,” Schröter said, adding that the 3D crosswalk is quick to paint onto the road and not much more expensive than a normal one.

And if they don’t work, they can be painted over again, he said.

READ ALSO: Braunschweig – The German city that deserves to be put on the map