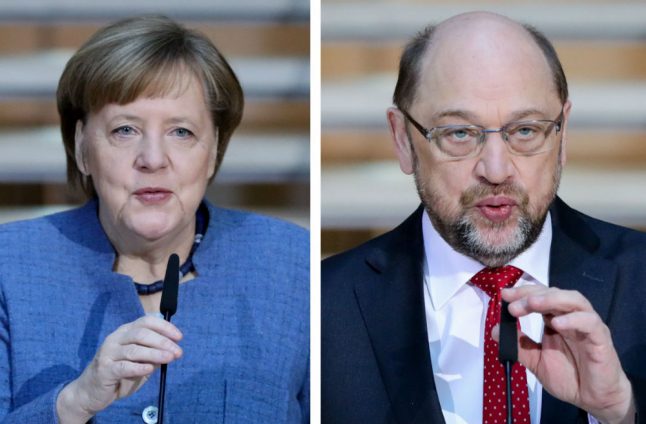 More than four months after Germany's general election, marathon weekend negotiations failed to yield the desired breakthrough on all outstanding differences. However both sides sounded upbeat about the chance for an agreement by a self-imposed Tuesday deadline.

“We've reached the point where we can get a good outcome,” conservative Armin Laschet, premier of Germany's most populous state North Rhine-Westphalia, told public broadcaster ARD.

“I am very confident that we'll reach a deal” on Monday, Justice Minister Heiko Maas of the Social Democrats (SPD) told the same programme.

As the parties returned to the negotiating table, a deputy leader of Merkel's Christian Democrats (CDU), Volker Bouffier, admitted the talks could drag on until early Tuesday to iron out the final kinks.

Europe's top economic power has been locked in political limbo since an inconclusive general election in September.

Although Merkel and the CDU came out on top, they failed to secure a ruling majority, leading to the longest coalition negotiations in postwar history.

The Social Democrats, Germany's second largest party, have served under Merkel in a right-left “grand coalition” for two of her three terms since 2005.

But governing in her shadow has cost them vital support and they scored a historic low 20.5 percent in the September poll.

Their leader Martin Schulz had initially ruled out working with her in the next four years, preferring to sharpen the SPD's profile in opposition.

Merkel at first turned to two smaller parties, the Free Democrats and Greens, to form a new government.

But when those talks collapsed in acrimony in November, she had to once more woo a reluctant SPD for a new pact.

The SPD has sought to drive up the price for a new deal, which it must still sell to its 440,000 members who will vote on the pact in a yes-or-no referendum.

That vote is expected to be tight, with leaders aiming to have a government in place by the end of March.

Both main parties reached a breakthrough deal in January when they presented an in-principle agreement to start formal coalition talks.

But the final round of negotiations has thrown up several sticking points.

“You see in the areas where we are still far apart that we are very different parties and that we come from very different fundamental beliefs,” Family Affairs Minister Katarina Barley of the SPD told public radio.

A deal for Europe

At stake for Merkel is whether she leads a stable coalition into her fourth term, or risks a fragile minority government or new elections.

Both sides hope to avoid going back to the polls, amid concerns the drawn-out gridlock could strengthen the far-right Alternative for Germany (AfD), which scored nearly 13 percent in the September election.

The political impasse in a key European Union member has had repercussions abroad, holding up French President Emmanuel Macron's push to overhaul the bloc and deepen eurozone integration.

While Merkel has offered only tentative backing for the reform plans so far, the SPD has been more enthusiastic — even about some of Macron's more ambitious proposals for the eurozone such as a joint budget and finance minister.

“We have a real chance, together with France, to make Europe more democratic, more social and more efficient,” Schulz, a former European Parliament chief, wrote in a message to party members.

ARD television reported that 71 percent of Germans do not understand “why forming a government is taking so long”.